Sorry for the obscenely long break between posts.  I realized I have not posted since IT convention in October and my only excuse is that life hit hyper drive since then.  I had WAY too many projects come up at once.  I need to do a big shout out to Rogier Corbeau of The Dutch Fashion Doll World who graciously and beautifully handled the blog during the Integrity Toys convention.  You rock!!  I could not have left ITFDS in better hands during convention.

Back in July, I began some holiday shoots that I had planned to make into holiday cards.  Great idea but not enough time to turn it into reality.  Oh well, there is always next year right?   Since I don’t have time to send these, I thought I would just put it on the blog as one big digital holiday card to everyone.  I am so very grateful to all my readers for your support.  It means the world to me.  I hope to continue my photography series in the year ahead and I am looking forward to bringing more consistent content to the blog.  I hope this post finds you all happy, healthy and in anticipation of some really great dolls under your tree or in your stocking. 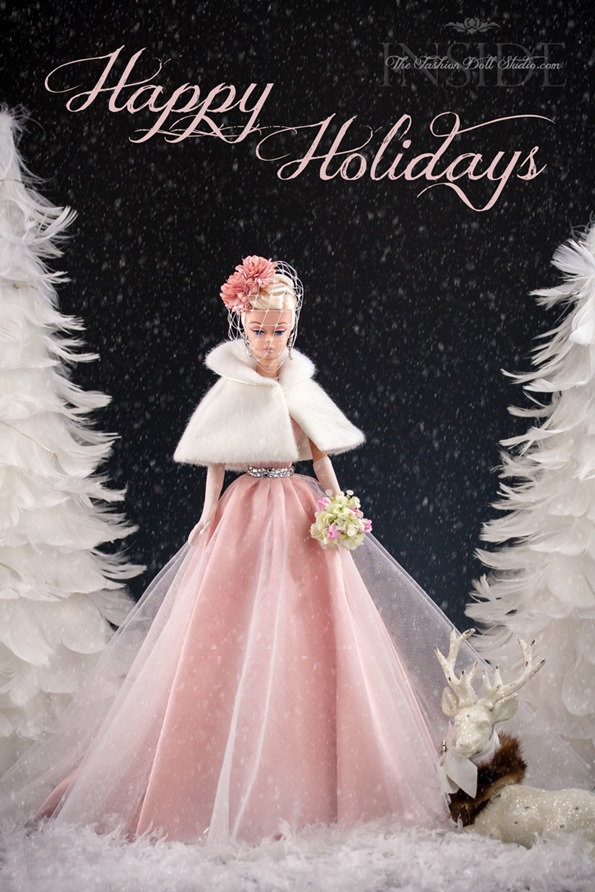 Ok…so many of you readers realize I am a little obsessed with my new Jon Copeland-Childers Poppy Parker repaint right?  Another thing I was recently obsessed with was this pink chinoiserie backdrop I did.  The apple green eyes of this lovely model inspired this setting and the chance to use this amazing backdrop.  Hope you enjoy! 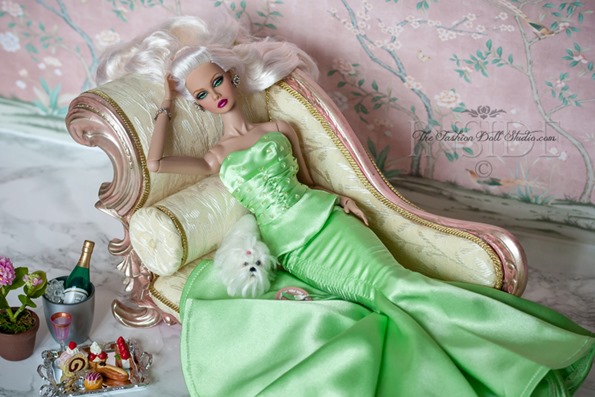 Last week, Integrity Toys and David Buttry gave us an amazing Poppy Collection.  In the same week I received, from SeloJSpa, my latest repaint from Jon Copeland-Childers.  The second I opened this one up, I knew I was going to be obsessed for a while.  Jon, I don’t know how you do it, but you continue to surprise, delight and amazing me.  Since David Buttry left me dreaming of Poppy Parker in Paris, I simply couldn’t wait to take her there.

* note* Poppy has been rebodied onto a FR2 FR white body

Suit and purse: Fashions by Shane 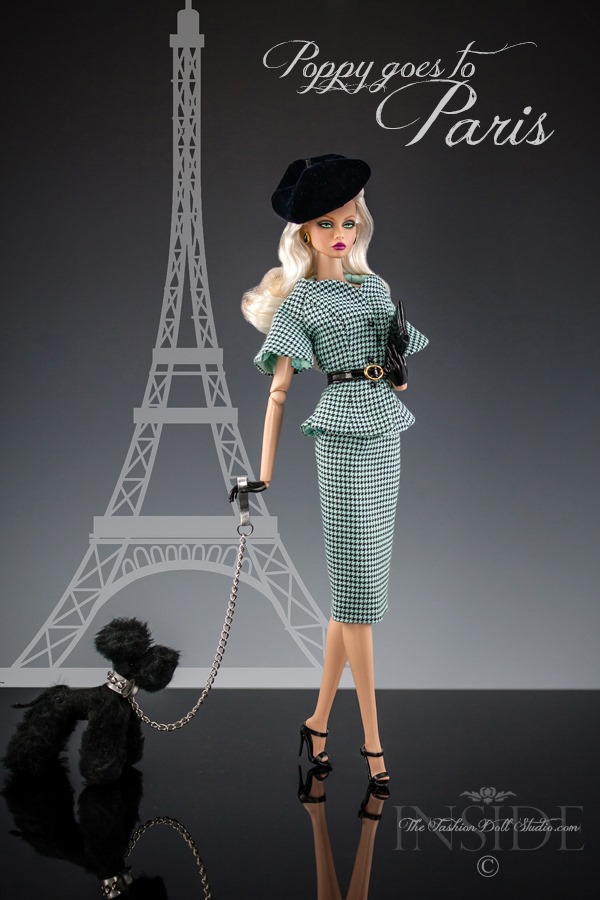 The eyes in this image are almost reptilian.  I took the shot and just went whoah…that’s a cover.

The Black and White Ball Gown

I had the hardest time coming up with a title for this post.  Usually, something comes to me right away and that is what I go with.  For these set of photos, nothing was jumping out at me so I asked myself “ What are these pictures about?”.  The answer that came back to me was…the dress.  These photos are primarily about this amazing black and white ball gown made by Eifeldolldress .

Necklace: made by me 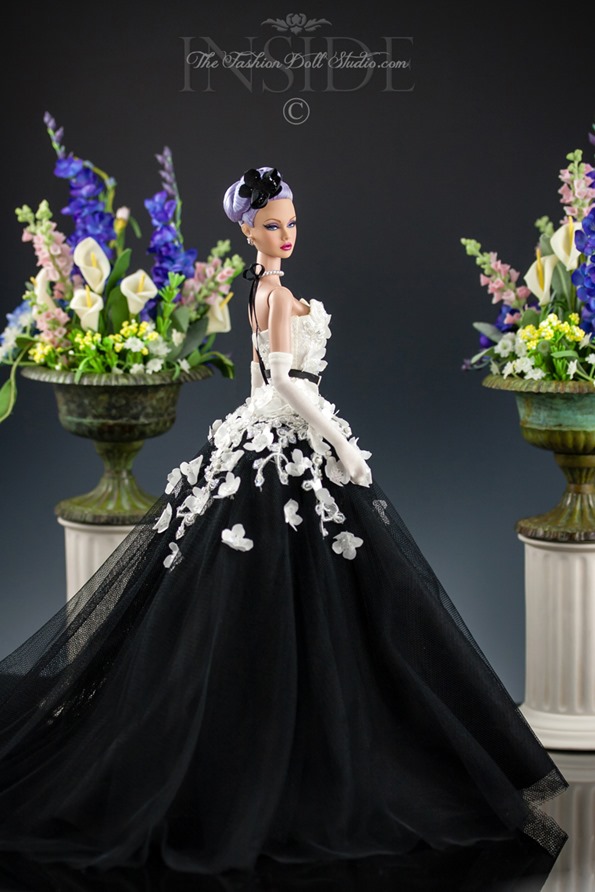 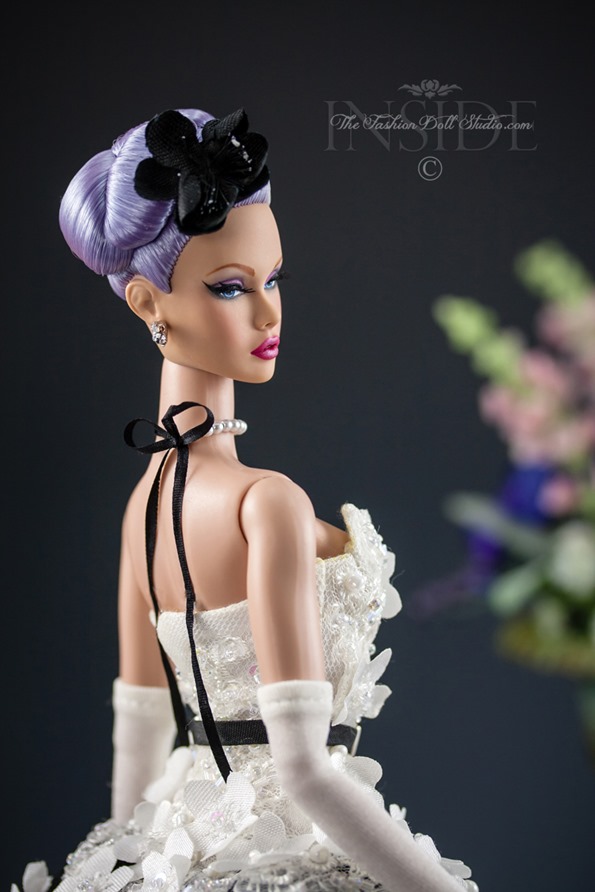 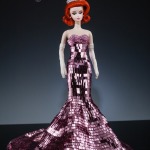 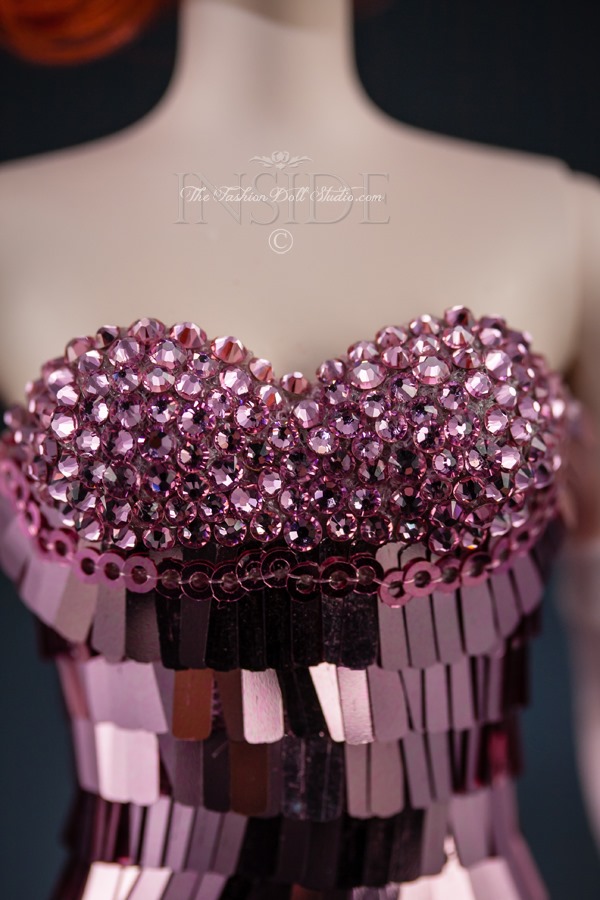 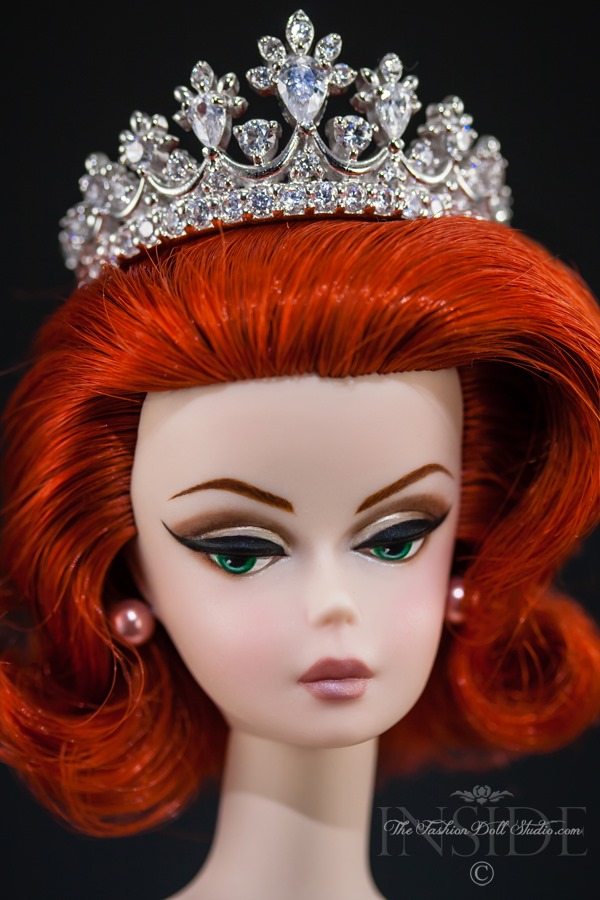 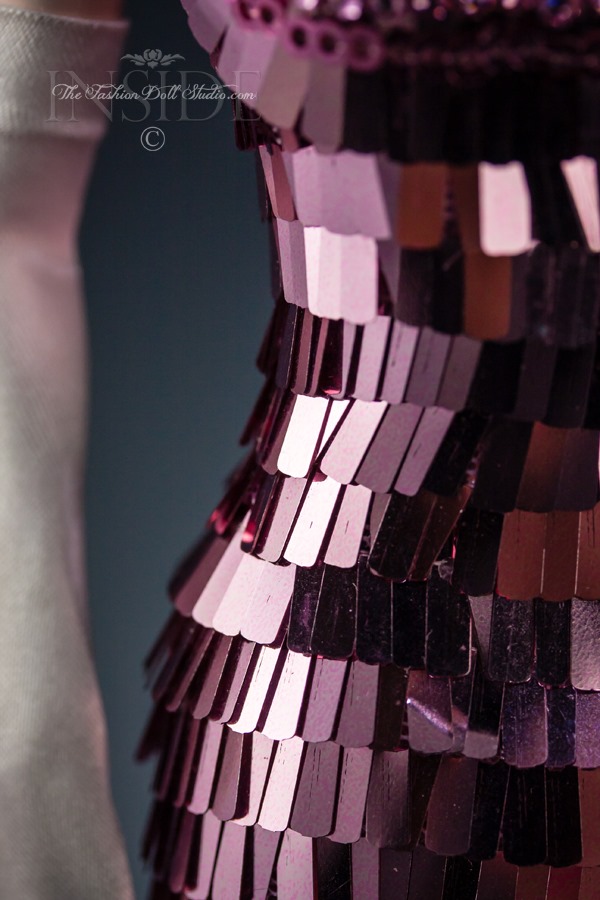 Easter weekend is upon us and everything is coming to life in the garden again.  The trees  are all blooming pink and white, the daffodils are up and the lilacs are on the way.  Life is good.  With this symphony of pastels booming in the yard, I had to do something in the studio to celebrate it.  I had the perfect model in mind too.  Recently, I sent the lavender haired Mood Changer Poppy Parker head over to Jon Copeland-Childers for a “spa” treatment and what he sent back to me had my jaw dropping. 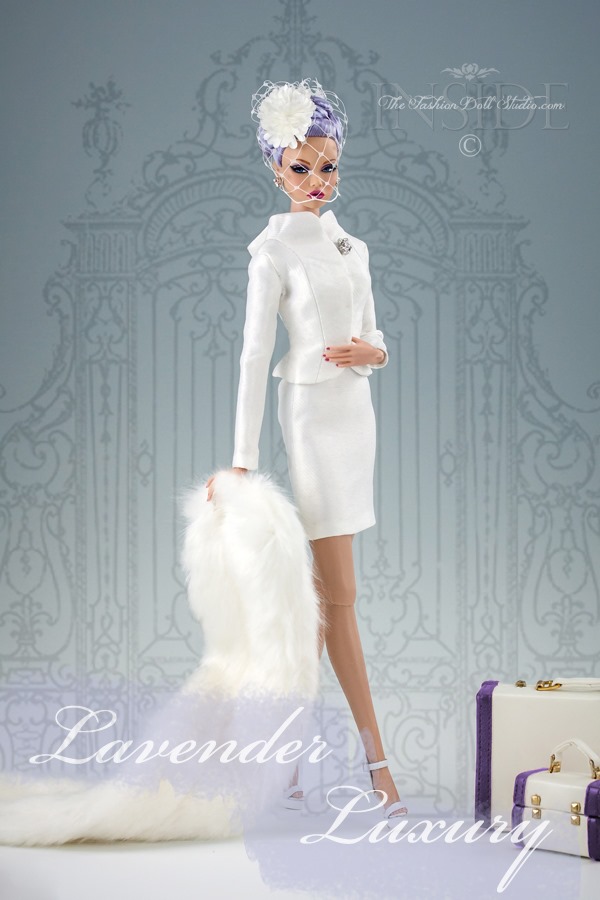 Fascinator hat: made by me with a scrapbook flower and a bit of birdcage veil

Luggage: Poppy Parker as Sabrina Most Sophisticated ( trim color has been altered via Photoshop) 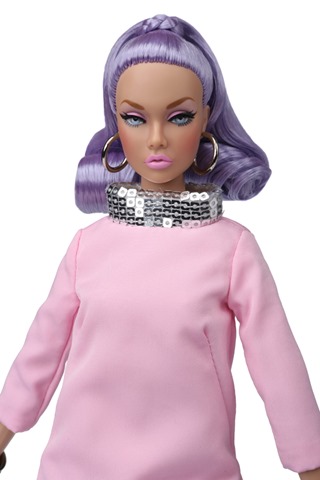 **Note** Before I get a gazillion questions, I have to declare here that the luggage I used is not OOAK.  It is the set from the Poppy Parker Sabrina series but I have photo shopped the trim to lavender.

This suit is a favorite of mine.  It is from the IT 2013 Premier Convention Collection.  I was searching through some Edith Head sketches a couple months back and stumbled across what might have been the inspiration for this one.

Model:  Mood Changer Poppy Parker repainted and restyled by Jon Copeland-Childers of SeloJSpa ( she has been re-bodied on a FR2 body) 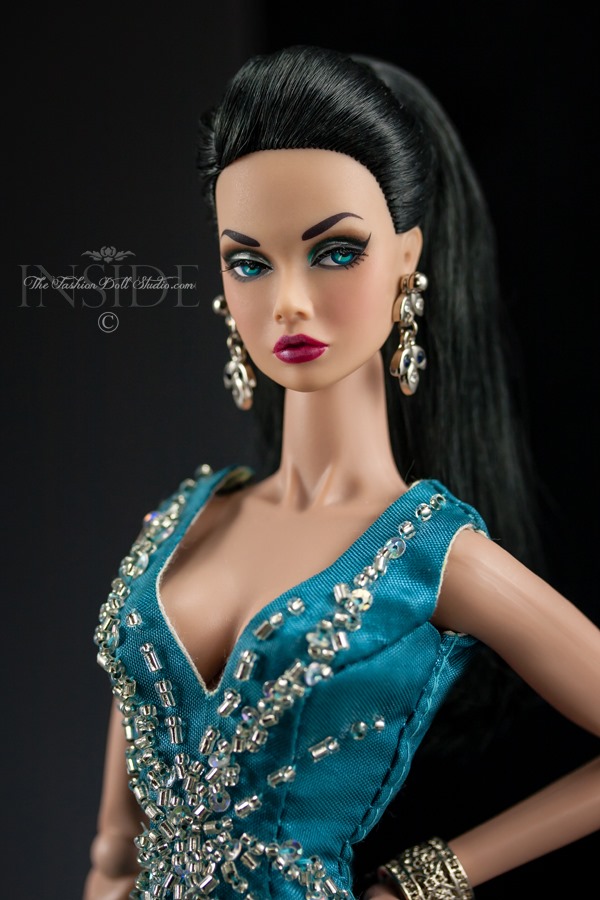 Reverence for the Repaint…Part II

Here is the third and final repaint I received from from the amazing repaint artist Jon Copeland.  She was originally a Suite Retreat™ Barbie® Doll.

This is what Jon Copeland did with her.  STUNNING! 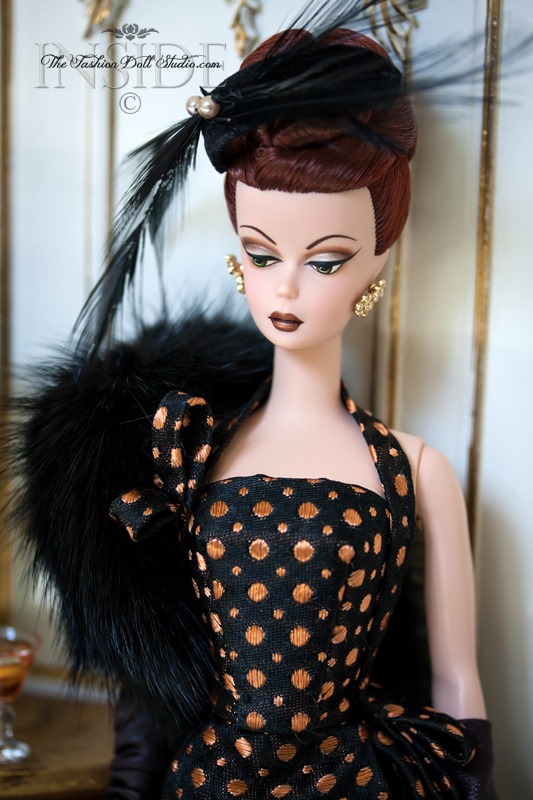 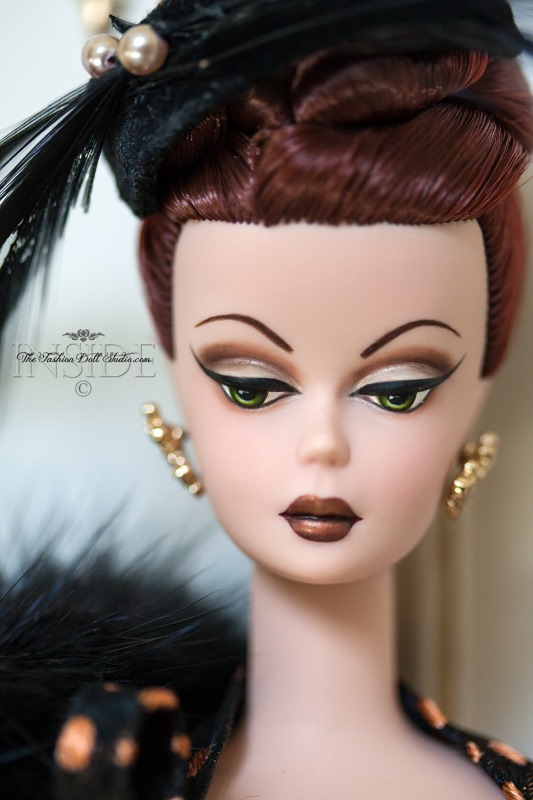 Patience is indeed a virtue.  It is a  virtue I don’t happen to have a clear grasp of most days.  When I send a doll off for repainting, I want it back like yesterday.  I like to send a doll off to a repaint artist and give general likes or dislikes but I don’t give specifics about what I want done.  I usually like to leave it in the talented and capable hands of the artist and I get what I get.  I sent a few ladies off to Jon Copeland of SeloJDesigns a number of months ago and while the wait to get them back was longer than he or I would have liked….it was entirely worth it.  I received three sublimely unique and beautifully painted OOAK’s that I am completely in love with.    I will be photographing and showing them over the next couple of weeks.  They are treasures…each and every one.

I am also going through a a bit of a wedding kick ( you know…the whole June thing) so a few brides will be thrown in the mix as well.  My bride fetish and one of my new OOAK’s from Jon combined in the doll room this afternoon for a truly enjoyable photoshoot .  I had roughly 30 minutes of sunshine today to do this set of photos.  I believe I maximized the time well 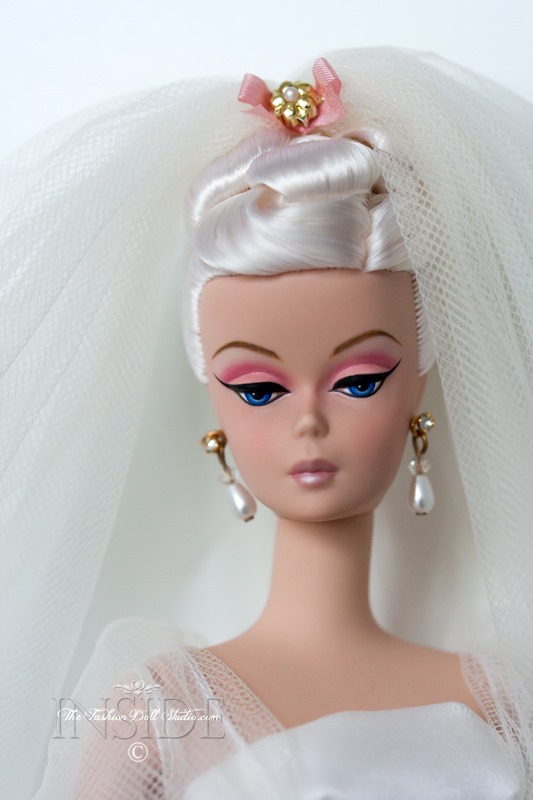 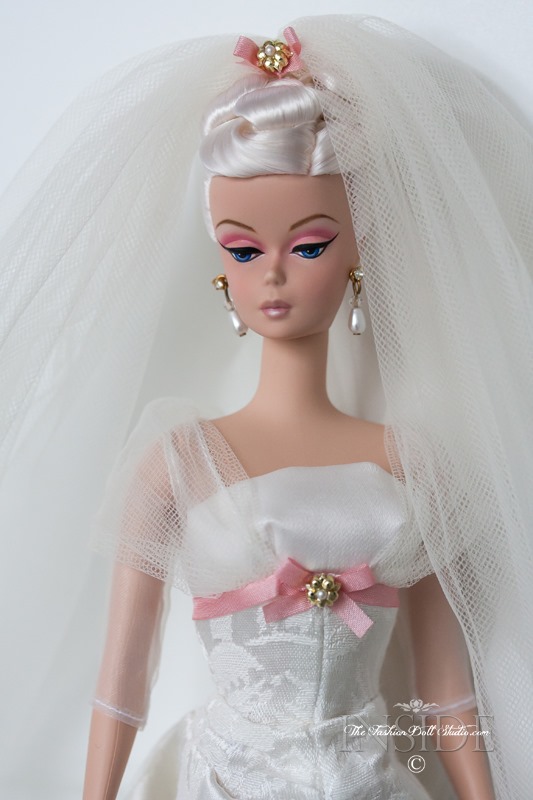 The Lady in Red: Part Four

This is the final part of this series and technically…she isn’t wearing red but in front of it.  Red, however, is a big part of the shot.  This “ Lady in Red” series had showcased the Fashion Royalty girls in my collection and it was time to pull out the beloved Silkstones.  I love these shots for a few reasons.

1) It showcases one of my favorites Silkstones..a repaint by Jon Copeland of SeloJSpa(http://www.facebook.com/SelojSpa) 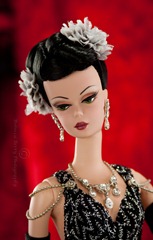 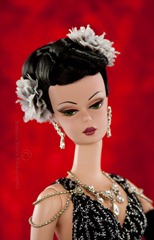 2) It has a high drama content…LOVE.

I love the lighting in this shot.  It gives it that feeling of her actually being up on the stage with that little spotlight on her face.

3) It shows off a glitzy showgirl ensemble(Jazz Diva by Mattel) and the styling was inspired by a great conversation with fantastic doll friend.   Matty of http://www.fashiondollfoto.com/  and I don’t get the chance to talk that often but when we do…good doll photos or doll blog ideas follow.  Matty, this one’s for you {HUGS!}.

and 4) The background was flash of inspiration and something that caused me to say to myself “ Oh I need to talk about this on the blog”.  After Matty gave me the idea that I should dress this doll in this outfit, I immediately saw a red show curtain.  I saw “full on diva” and she needed a crushed red velvet curtain falling in folds behind her.  One of my problems ( and yes, there are many of those LOL!) is once I have this image in my head..there is no talking me out of it.  I knew I didn’t have crushed red velvet fabric for a backdrop.  I also habitually run into the problem of having something in my head and then not being able to find it ANYWHERE.  I knew I didn’t want to have to spend time or money searching for red crushed velvet at my local fabric stores.  That’s when I took a step back and said “Okay Bec..what do you have that would work?” and inspiration struck.

“Ways in which you never thought you would use your kids old Halloween costumes.”

Yes!  That was my daughters Halloween costume from a couple years ago sitting in a box in the kids playroom.  It was the right color, texture and bonus…it had some black lace detail accents…more DRAMA!  Perfect background curtain material.  So if you are having trouble finding a background for you photos, don’t forget to check out the kids dress up box.