Ok, so the craziness is mostly over in our house.  I don’t think I have entertained that much during the holidays in a very, very long time.   Now the daunting task of taking down all the holiday décor is ahead of me.  I did not think about that today though.  Today, I grabbed my trusty point and shoot, one of my favorites from the Fashion Royalty convention and an outfit by a dear friend that I have been wanting to shoot since I got it.

Suit and hat: Bellissima Couture ( adorable little cameo was added by Hilda too ) 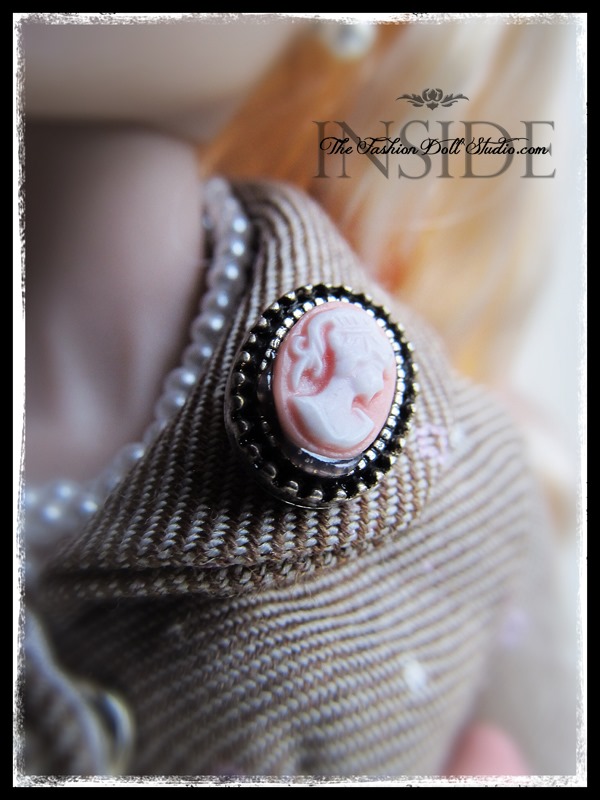 Are you sick of Poppy yet?  Well I’m not so here is more Poppy spam.  Today Poppy is showing us a more muted and refined South Beach look.  Robert Best designed a number of dolls from 2006-2007 called “On Location” Barbies.  The swimsuit in these shots is from “On Location South Beach” Barbie.  All the dolls in that series were fabulous and I still have them.  They came with a swimsuit, sophisticated evening outfit and a more casual day wear look.  What more could you have asked for in a set?  Sadly, he only did four and that was it.  The set was worth it for the clothing alone but the dolls themselves are gorgeous as well.  Here is the link to their photos at the Barbie Collector website: 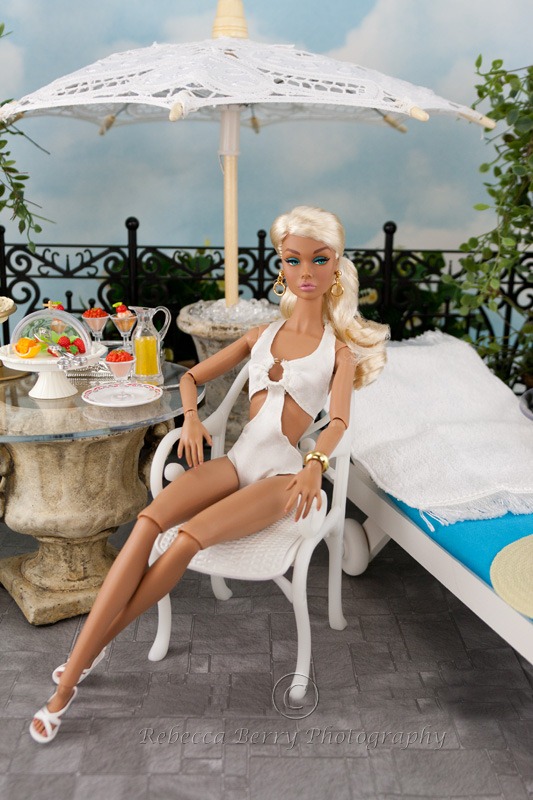 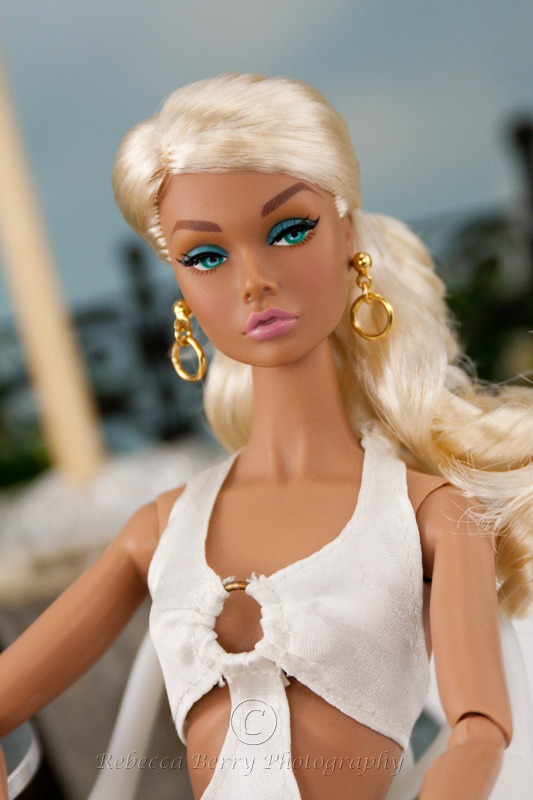 I am really appreciating these sunny shots today.  We have about 6 inches of snow on the ground with more on the way tonight.  This is unusual for the Pacific Northwest in the United States.  We don’t typically get this much snow so close to the ocean.  I’m glad that Poppy is enjoying her time in the sun.

As many of my fellow collector enthusiasts and photographers know, building  miniature sets for photo shoots is not the easiest thing to do.  It can be incredibly frustrating if the picture in your head does not match the diorama that is unfolding in front of you( not to mention everything falls over with the  slightest movement…I wish I could tell you how many times I had to reset the Re-ment pieces on the table….lost count after 5).  There have been countless times where I had to scrap an idea and come up with something completely different because it just would not come together.  Then…other times it just comes together so easily…a piece here, a piece there..oh I think I have this and it would look great there…kind of thing.  I love it when everything just kind of comes together.   Also, and I don’t know if anyone else does this but, when I set up a diorama for a photo shoot there is a story in my head as I build the scene.  The more elaborate the diorama, the more elaborate the story in my head.

Typically, as day after day runs the seemingly unending gauntlet of rain, rain and more rain during January in the Pacific Northwest, my mind will stray towards sunnier places and luxurious vacation spots.  That was definitely the thought process behind this set and the next couple of sets of photos.  The story in my head had Poppy vacationing in the beautiful south of France.  She is on a patio of some palatial villa overlooking the stunning unique blue of the Mediterranean Sea.  There is a pool just off camera and Poppy is relaxing in the sun just before breakfast.  Oh the life!  And that is one of the beauties behind the photos for me and one of the reasons I enjoy photographing these miniature diva’s so much.  I will most likely never vacation in a palatial villa in the south of France….but Miss Poppy can….and that is better than nothing.

Okay guys….no more musings from “How Rebecca beats the winter time blah’s”  On to the photos……….

Set:  Table is stone urn found at local shop with acrylic circle on top.  Chase lounge is gift given at 2011 GAW..found this one at Barbiecon 2011.  Little table next to chase is white Ikea vase with small acrylic disk on top.  Pink orchid is a magnet ( back is flat but you can never see it from photos).  Food and serving pieces on the table are all Re-ment.  White chairs are from a Barbie set from years ago…forget name.  Railing is Buyer’s Choice.  Umbrella is battenburg lace doll umbrella..found at a doll show.  Stone urn umbrella is in found at flea market. Greenery is from all over really.  Patio flooring is miniature paper flooring.  Towels and water bottle on table are from Silkstone Spa set.  Bracelet on table is Ms. Poppy’s original one.  Magazines on table came with new Barbie Basics swimsuit accessory set.  Pink pillows on chairs were made by the talented Maryann Roy ( http://maryannroy.wordpress.com/) 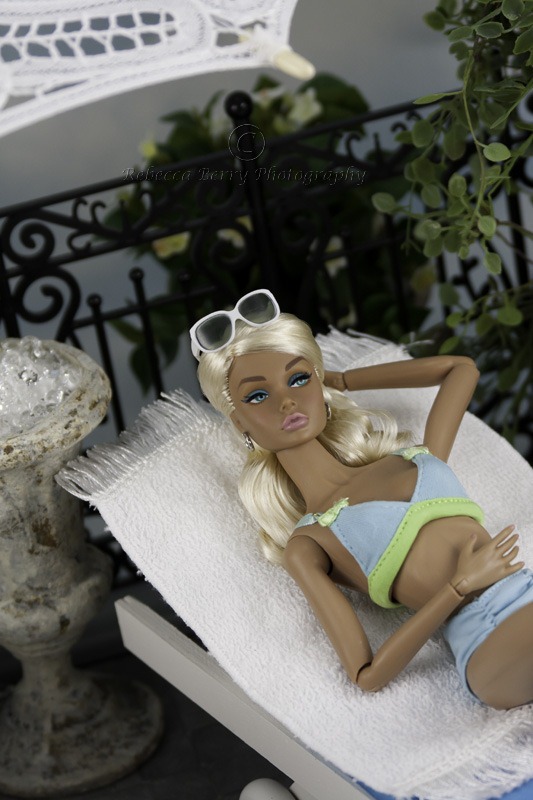 The pink ladies have tea

Thanks to a dear Barbie friend I was able to add City Smart Silkstone to my collection.  I just love this lady and she will show up often in my photos.  For those of you who have told me you never get to see City Smart redressed….this one’s for you. 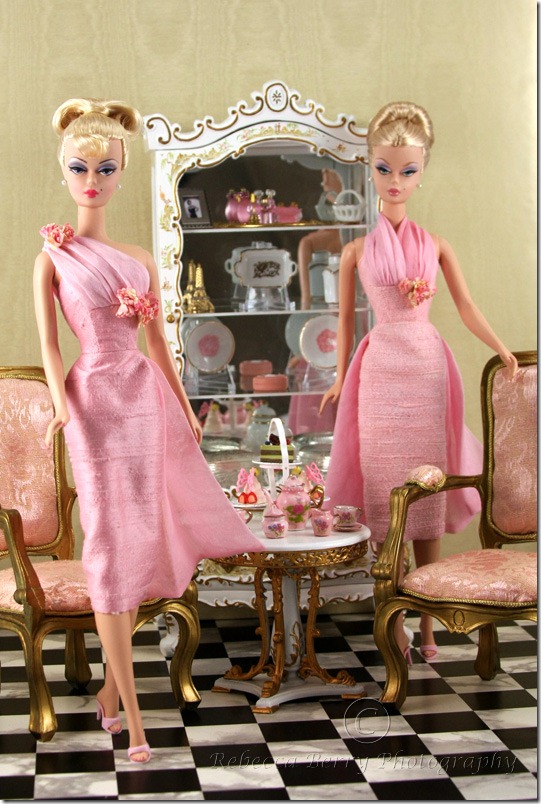 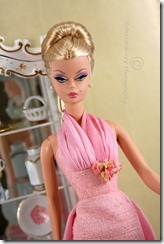 For those of you who want more info on the details…this next bit is for you.

Display Cabinet and white/gold side table are 1:6 Bespaq from

Treats on the stand: Re-Ment Special Cakes for me #7 ( Garden Party)

When Re-Ment becomes an obsession/addiction.

the state of being enslaved to a habit or practice or to something that is psychologically or physically habit-forming, as narcotics, to such an extent that its cessation causes severe trauma.

the domination of one’s thoughts or feelings by a persistent idea, image, desire, etc.

I have often wondered if I am addicted to or obsessed with Re-Ment.  There is just something about those little reproductions of daily items…dishes, food, perfume bottles…ahhhh the list could go on forever.  I am not quite sure what it is but as a photographer, I love these little items because they can help fill out a scene and make a photo infinitely more interesting.  There is also the fact that they are just plain fun to stage and play with.  Like many collectors, I started off with just a few sets I had found at a local Japanese market.  Then…because those first few sets were so fun…I had to have more. 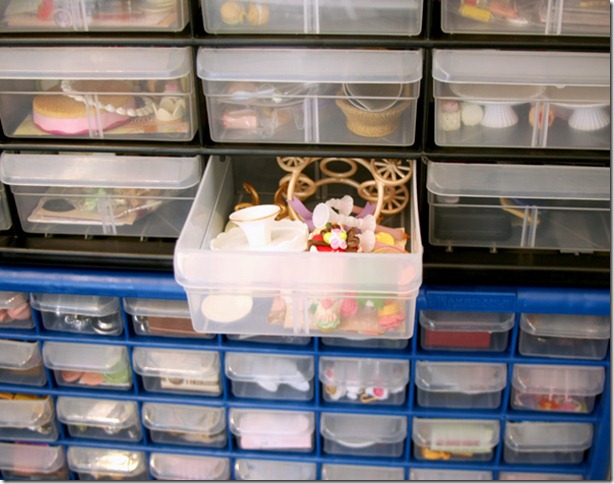 I used to just store the sets in a big box but then it became so difficult to find what I wanted, I was not using them at all.  I found these hardware organizers that work very well for these small sets.  The added bonus was that they could be hung on the wall next to my little studio space.  This way I can just grab what I need.