The Gang’s All Here

The Russian Silkstone gang that is.  Well…not all of them.  Darya will be here sometime in late summer but I just couldn’t wait to do a group shot.  I received Verushka today and I was so enthused I just had to get the gang into the studio.  First of all, let me just say it took a little while to warm up to Verushka.  That hat!  I guess I am just not the floppy sides down Elmer Fudd hat kind of girl.  I was going to just take the thing off except I had heard stories that she is sparsely rooted under the hat.  I decided to just tie the floppy sides up ( like any good hunting hat and much more like the Elmer Fudd we know and love) and I have to say I like it WAY better.  I love the platinum blond with the black on this lady.  Very dramatic and that is just what I was looking for with this line. 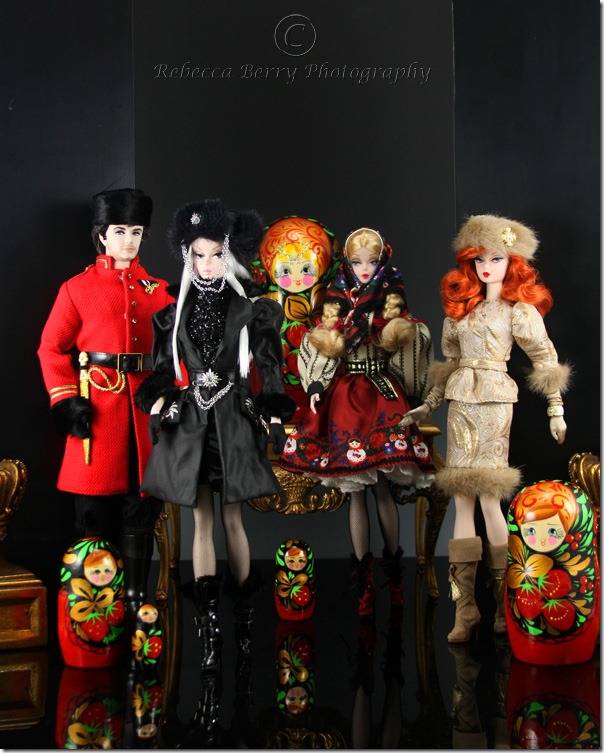 After seeing many amazing photos that people have taken of Ekaterina with her hat off, I decided to remove her hat and reposition it.  LOVE it now.  I had thought I might replace the hat with a fur Dimitha hat but for now…she will keep her original hat.  Finally, I am so excited to be using these amazing Russian stacking dolls I found at a doll show recently.  I was encouraged to purchase this particular set by a dear Barbie friend ( cough, cough Silkyfever, cough, cough) and I am so glad I listened to her. 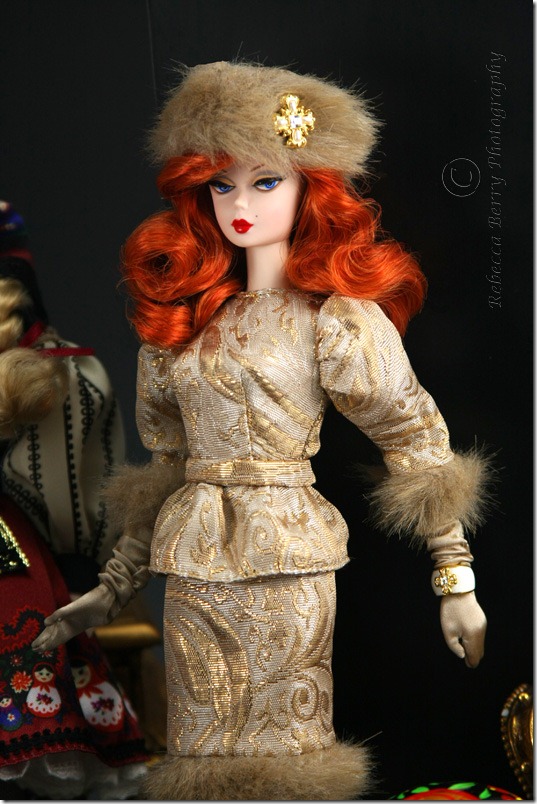 And last but not least….little Mila.

Robert Best has designed a new line of dolls for the BFMC inspired by Russia and Russian fashions.  The first one into the doll studio is Ekaterina.  She is exclusive to the Barbie Fan Club .  I am always a sucker for any doll with red hair.  When I saw the promo pictures, I knew this lady would be destined for my doll room and The Fashion Doll Studio.  Upon arrival, I was not impressed.  In her coffin of a box, she appeared very pale and the hair was not the riot of curls the promo picture would indicate.  That being said, I decided to debox and am very glad I did.  This is definitely a lady that needs to be DEBOXED to reach her full potential.  I did have to finesse the hair a bit to get the fuller look…more curls not one big curl on either side of the head.  The hat….not the best but I can deal.  I foresee a hatless model in the future but for now it will stay on her beautiful head.  I am a little afraid of the hat hair situation under there.  The bracelet was a surprise because I was expecting the same bracelet as D2D and Preferably Pink but it is slightly different – yeah!  The brooch on the hat is beautiful.  The outfit is similar to JNSQ but not too close.  The boots people…are…. TO DIE FOR.

I had some fun with my macro lens in the photo shoot so I was able to get some great up close shots.  Hope you enjoy.