This morning the Barbie Collector website was updated to release images of this new addition to the Silkstone BFMC 2017 collection.  Now..here is where I would say “BFC members were given a sneak peak of this one a month ago” but…I can’t say that as there is no official Barbie Fan Club as of the posting of this blog report.  Let’s face the facts folks…the BFC may not be coming back.  This makes me sad but I can’t pretend I and many others didn’t see the writing on the wall a long time ago.  With all the troubles on their website, crazy no win treasure hunts, questionable business practices ( {cough}, camel coat, {cough}) the demise of the BFC doesn’t surprise me at all.  Oh and there is also this little factoid.  Mattel stock fell off a cliff a couple weeks ago due to abysmal earnings.  Way worse than what was expected…never a good thing for a publically traded stock.

This is just me speculating here but..all of these bits and pieces point to  bad news for the Barbie Fan Club and the future of Barbie Collector.  How much longer before the current Barbie Collection website is rolled into the new Mattel website?  Bye Bye collector forums.

So, with that “Debbie Downer” opener, lets talk about the latest release Mattel DID in fact give collectors today. 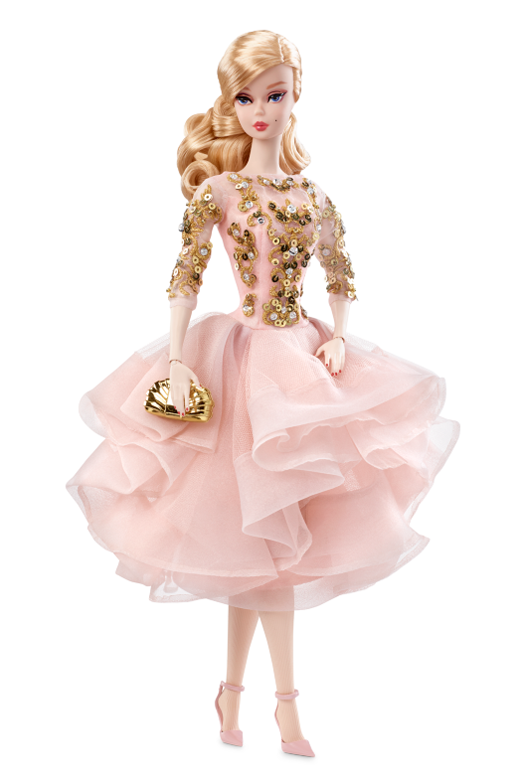 That is one hefty price tag for a shorter dress and basic accessories ( no jewelry folks and a plastic purse).  I am also not wowed by the facial screening in these images.  I do realize however that she may look a lot better IRL so there is always that hope.  But..as they say….a picture tells a thousand words.  Do these images sell a $100 dollar doll?  Not too sure about that.  I think more than anything, my question for Mattel’s Barbie Collector BFMC personnel is “ Does your lack of communication, perks for your customers(BFC), and general disorganized product roll out encourage collectors to want to buy?”

This is not an official sneak from Mattel but it is all over the internet and social media so I am going to share it here.  This was first reported by my very fine friend and fellow blogger Rogier of Dutch Barbie World.  Zlatan Zukanovic posted some amazing and beautiful photos on his Instagram account a few days ago of what appear to be the first articulated Silkstone.  Her face is adorable!! 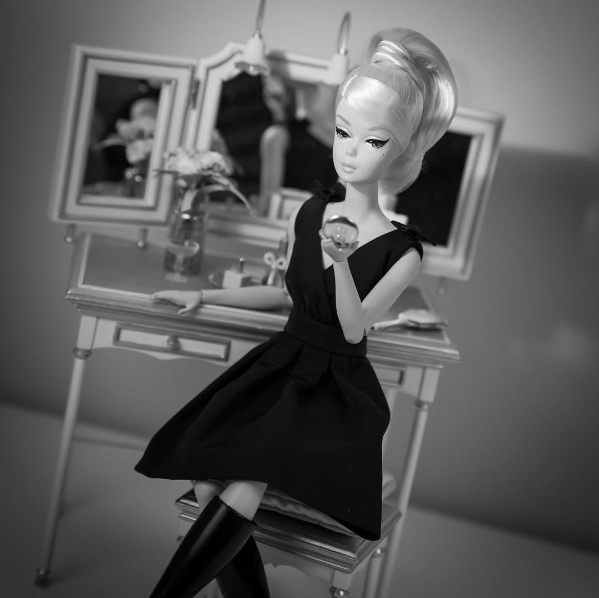 Gorgeous right?!!  Then…this afternoon…guess what shows up on Ebay!

Original listing is here.  Not a word from Mattel, not a sneak, not a whisper.  I find this very interesting and I also question the sales hype of the BFC where they tout that the club is “a passionate collecting community with unparalleled access to the world of Barbie”.  Yes, the collecting community is unparalleled in this arena but I am no longer sure how much of that is due to Mattel.  It seems that more and more we are finding and receiving information from sources other than Mattel.  Perhaps this is just the way things go with social media being the way it is or…perhaps this is just a marketing team that doesn’t really seem to know what they are doing.  Either way, it looks like reaching out and watching things like Instagram, Ebay and Facebook are the way to get information going forward.  Love the photos that Zlatan did so it is not a chore to look at his lovely photos whenever he posts.  Bonus!

When this beauty is available….I’m buying!!

Mattel’s first BFMC offering will be available at BFC starting February 2nd.  What a perfect way to welcome Valentine’s Day.

No more than 10000 units produced worldwide

It looks like Mr. Best and Lars(set designer for Mattel) are channeling their inner Dior with this set.  How Fabulous!!  I ask again…can we please, please, please get these little chairs in production for purchase?!! 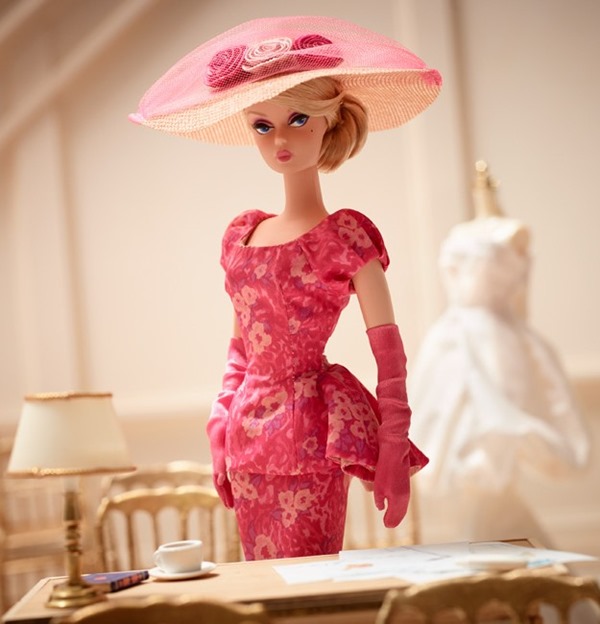 Ahhhh….so very Dior.  I want to see the sketches on the table.  Any clues to what is coming out this year?? 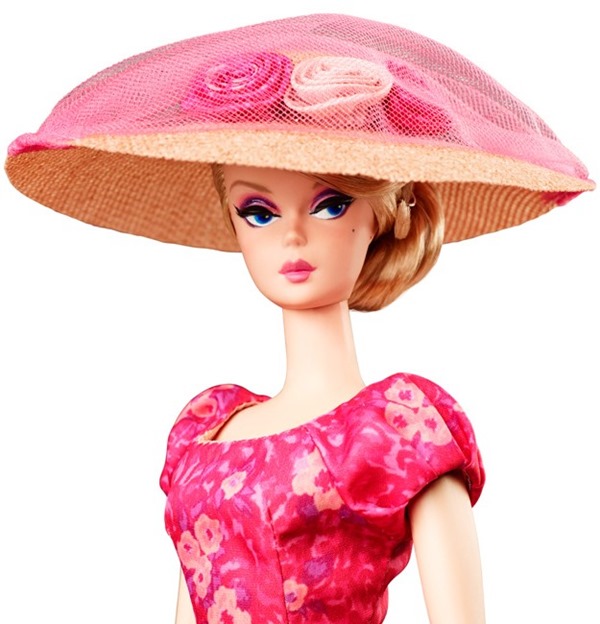 Rogier over at one of my favorite doll blogs, Dutch Barbie World, reported this morning with these pictures from European Amazon sites.  If you want information on the Silkstone world first…sign up for his blog posts.  I have to say…I like the IRL photos even better.  And that pale pink liner?!!! {Swoon…again}  Now how am I supposed to debox that?!  Rogier laughed and said “Easy, get two”  Wise words Mr. Corbeau.

The new logo is very reminiscent of the vintage Dior logo.

Owning a Silkstone has never been more affordable with this $50.00 price tag.  What are you waiting for collectors?  I will be running to get this one…may even get two

Pictures are starting to show up on retail sites without the watermark so I can finally show them here.  As I hinted at in my last post, another of the Silkstone offerings for this year is, I believe, inspired by a look strait off the D&G runway.

Here name is Dulcissima and she is due out later in 2014.  I have heard many different price points for this one.  The average guesses put her around $75.  Mattel does not have her formally listed on their site yet so until they do, we won’t know for sure.  She is designed by Robert Best and the name means “sweet” in Latin. 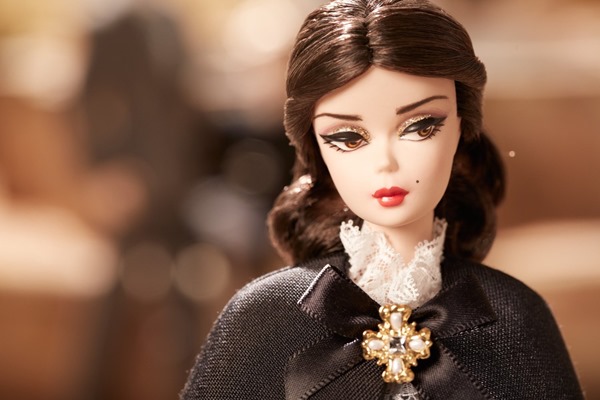 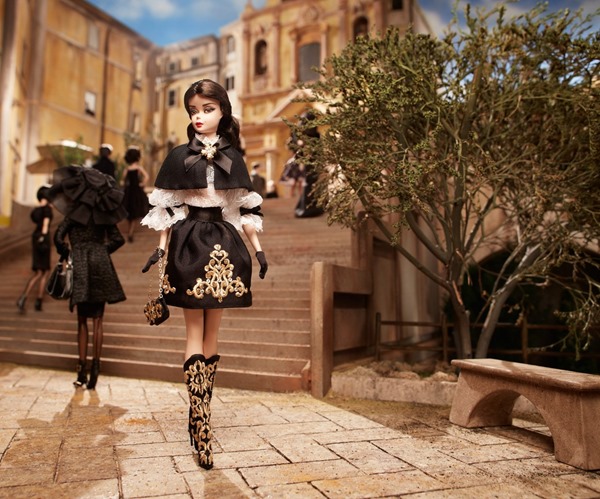 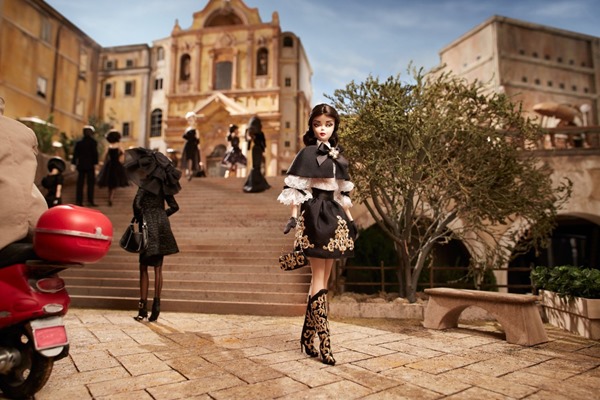 Dulcissima e Bellisima….sweet and beautiful.  I like the look of this one better than Fiorella.  Come on….the boots alone are worth a second look.

BFC also gifted collectors with a spotlight video about the first installment in the Alta Moda inspired Silkstone collection this year.  The set is sublime and the video is adorable.  Nice work Lars and Zlatan!!