The BFMC 2013 Atelier Collection: A peek into next year?

Okay…so you all know I am a little obsessive compulsive when it comes to Silkstone Barbies right?  I was so excited when I learned that Robert Best was continuing the design aesthetics of the 1950’s and early 60’s for his 2013 BFMC collection.  This was the “heyday” of the haute couture design houses and for many epitomized glamour.    I absolutely adore that time in fashion so it stands to reason I am anxious to hear about and see sneaks with what we can expect next year.  As I stated in my previous post, I believe we received a very solid sneak of one doll.  It would appear that she will be blond, possibly platinum blond, with a back ponytail hairstyle.  I can’t tell if she has bangs or not.  To me, it kind of looks like “Movie Mixer” with black bows but I could be completely off on that one so don’t hold me to it.  It would also appear that she has a cream boat necked cocktail gown with black tulle overlay and accent lace at the bottom. There is black bow detail at the bust and waist.  It also looks like she is wearing white gloves.There was a most deliberate shot in the video of him working on this sketch and dipping his brush in water and releasing a light blue paint.  There has to be some blue in this lady somewhere I am thinking ( blue bows?? blue accent somewhere).  It looks like she will have bows on her black shoes as well…how cute!.  Now….before I get going full force on my speculation train here folks…please realize these are all guesses.  I have no information from Mattel save the video that we all can see so …take everything I say with a grain of salt.  Disclaimer ended.  We do know however, that Mr. Best’s designs for next year with have a flavor of Spring.  He shared that at convention.  So I am thinking lighter colors and softer fabrics.

** pictures are from video from Mattel therefore owned by Mattel.  Please don’t copy or reproduce** 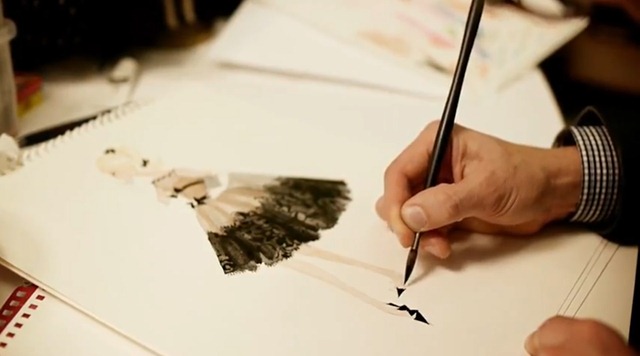 The other shot from the video that was intriguing me yesterday is this one…yes, I know it’s blurry but it was the best I could do. 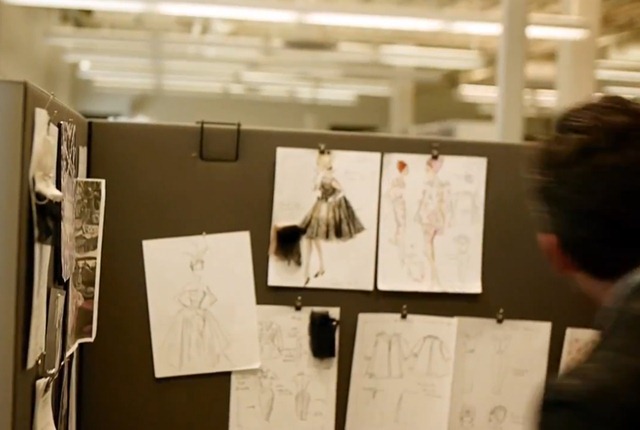 There was another scene right before this one that showed him removing a piece of fabric from a sketch of a doll in a dark colored ( blue maybe?) suit with hat.  The sketch said specifically Atelier part II so I am thinking we may see another day suit with a hat.  Yippee!!  I will never be upset about more suits with hats.  It also looks like there is a sketch with a redhead in a soft palette suit with pink/peachy turban style hat.  Oh My Word!!  My hat fetish just started doing the rhumba.  There is also a sketch to the left there of what appears to be an evening gown with feathered type headpiece…kind of Gloria Swansonish.  Again, I have no idea if any of these sketches will be produced but they are far enough along to have detail sketches and fabric swatches.  I smell….production.