The Birth and Upkeep of a Diorama…..

I love to build dioramas.  I don’t seem to make much time to do it though.  Most of my inspiration goes in fits and spurts.  Once I start a project, I tend to finish it but it’s the getting it started that is my main hurdle.   When Robert Best did “Shop girl” I knew I needed to do a shop for her.  After thinking about it for a while and doing some research, I finally had an idea in my head and put a plan into action.  When shop girl arrived, a new home was ready for her.  Belles Choses, as it came to be known as, had it’s grand opening.

I was so happy with how it turned out that I decided to move it to a larger venue so the vintage fashion shop was packed up and “Belles Choses” moved in to the newer and bigger space.

When I originally did the back wall of the diorama, I used a beautiful soft blue paper and used spray adhesive to fix it to foam core to give it a nice smooth finish – like wallpaper.  What I did not take into account was that this type of adhesive will lose it’s hold over time.  So..fast forward a year later…and you have this

The heavy picture frame I was using for the  inset display case was pulling the paper away from the backing and I was seeing these big voids…like the one above this frame.  YIKES!  I knew if I left it as is, the frame would eventually pull away and fall taking the paper with it…not good.  So, I went about trying to come up with a fix.

First, the space had to be vacated……so sad and lonely in there.

The displaced horde….LOTS of little pieces in this diorama….good excuse to dust everything

Let the repairs begin!  I decided to swab behind the paper gaps with adhesive and see how it went.  It’s not as smooth as the spray adhesive but…it may do.  I shored up the heavy plaster frame with an equally heavy candlestick while it dried. 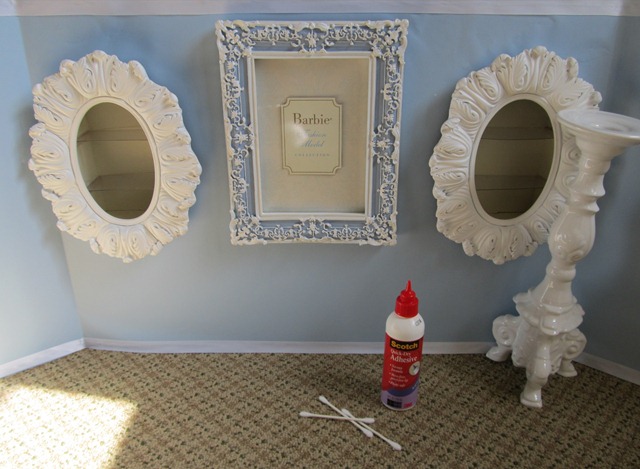 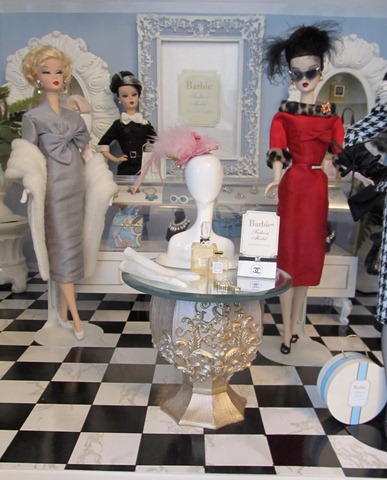 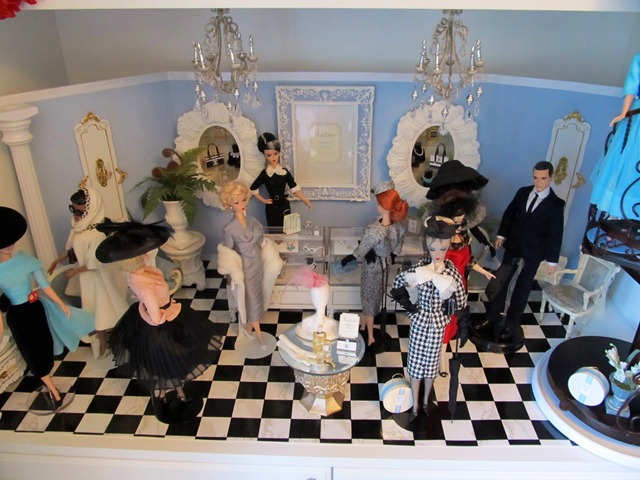 What did I learn?  If you are using spray adhesive, you may also want to swab with some additional adhesive in key support points.  I will be doing that from here on out.  A big “Thank You” to all who commented on flickr and emotionally supported me through this weekend while I fixed it.  It always helps if you know someone is pulling for you

Shopgirl’s fancy shop gets a name and some press

Ahh Photo shoot Friday yet again. Many, many different projects going on this week. First and foremost, Shopgirl’s fancy shop received a name and it’s Grand Opening photo shoot. I had to set it up on the table in the doll room so it had better light for the shoot ( thank goodness for the good weather this week!!) I had to fit in bits and pieces of time for the photo shoot throughout the day so I could get the best light – afternoon works the best with the maximum amount coming in through the doll room windows. Here is the setup 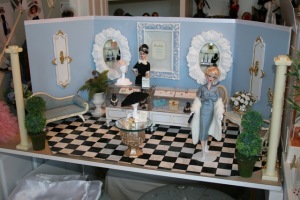 The photos turned out pretty good and I spent a huge chunk of time photoshopping and tweaking. Then a brainstorm hit and I decided to do another slideshow set to music just showing the shop and introducing the shops new name. Now there is a whole other story…..how did I decide on the shops name. I decided I couldn’t just keep calling it Shopgirl’s fancy shop. It needed its own name. It needed something classy to fit with Shopgirl. It needed something French as it felt like a European style shop. I bounced ideas of my trusted in-house technical support. He suggested I try translating directly “fancy shop”. Translated to French it read ” Boutique de fantaisie “. I looked at my technical support and he looked at me…..something was not quite right. “What?” he says, “Sound too much like an exotic dance place??”. Yep, it did. So off to find a better name. After much discussion we finally settled on “Belles Choses”. Translated, it means beautiful things. Yeah!! Shopgirl finally has a name for her beautiful shop. I finished up the slideshow and then began the arduous task of converting it to WMV (chug,chug,chug goes the computer) and posted it to youtube for everyone’s viewing pleasure. I think it turned out really cute. The snappy music is from the soundtrack “Miss Pettigrew lives for a Day”. A number of people have asked for more information on the lighting fixtures in the shop. Here are some more up close and “behind the scenes” photos of the shop.

The white panels with the gold embellishments are just mirrors from some Disney princess sets that I painted white (Krylon white spray paint for plastic ) and added gold scrapbooking photo corners to. The light fixture is a doll house candle sconce that I made look bigger by adding a gold escutcheon ( fancy word for keyhole cover). The light fixture could work if you wanted to drill a hole through the back of the plastic mirror. I was too lazy so that light fixture does not work. The built in display shelves have working lights however. They are just the clip on book lights that you find everywhere. Notice how I like to reuse silkstone boxes to LOL! I always love the “behind the scenes” photos from other people’s doll blogs so I hope someone else will find these of use. I also wanted to show the absolute carnage in the doll room after one of these shoots. 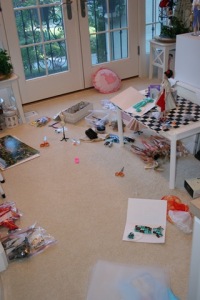 There is usually stuff everywhere because when the light is good, I’m just pulling stuff out and getting it set so I can get the shot. I worry about clean up much later. I was also able to do a phototent shoot that day and used a seldom used model in the silkie world…Chataine. I recently aquired some outfits from Fashion Boulevard. I LOVE them. Here are a few shots from that set

. Well that about does it for now.