The Sweetness of Alice Blue

I am on a Poppy Parker high at the moment with the arrival of all of the International Fair Poppys.  I am also on a bit of a color kick and apparently it is specifically a blue color kick.  After spending an entire post on the color Tiffany Blue and it’s origin and meaning, I found myself wondering about the origin of “Alice Blue”.  That was the first thought I had when I saw this red haired beauty in her adorable skating outfit.  It brought to mind thoughts of Alice in Wonderland (as I recall, colorized illustrations typically had her in blue) or the shade of blue favored by the Queen Mother (a factoid I am particularly proud of knowing because it allowed me to win a point in trivial pursuit against my husband…something I NEVER get to do).  I digress.  Anywhoo… It got me to wondering where did this term of “Alice Blue” come from.  Here is the answer according to Wikipedia

“Alice blue is a pale tint of azure that was favored by Alice Roosevelt Longworth, daughter of Theodore Roosevelt and which sparked a fashion sensation in the United States.

The hit song "Alice Blue Gown", inspired by Longworth’s signature gown, premiered in Harry Tierney’s 1919 Broadway musical Irene. The musical was made into a film in 1940 starring Anna Neagle and Ray Milland.

The color is specified by the United States Navy for use in insignia and trim on vessels named for Theodore Roosevelt.[citation needed] "AliceBlue" is also one of the original 1987 X11 color names which became the basis for color description in web authoring. The name "Alice Blue" was trademarked in 2001 by a costume company called "Alice Blue Fancy Dress & Costume" in the U.K. but the livery color chosen by them was not the correct Alice Blue shade, but instead a rich royal blue.

This particular shade of blue is also referred as white-blue (or blue-white) and ice/icy blue, due to its very pale coloration.”  (source Wikipedia)

Here is Miss Sweet in Switzerland Poppy Parker fresh out of the box in her first photo shoot for Inside The Fashion Doll Studio..in her Alice Blue outfit.

And since it was too warm to be wearing the fur hat, muff, skates and tights for long… 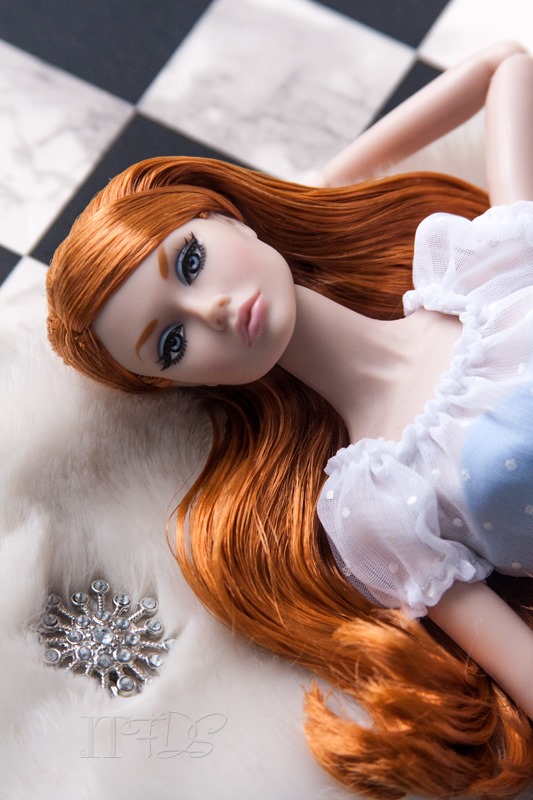 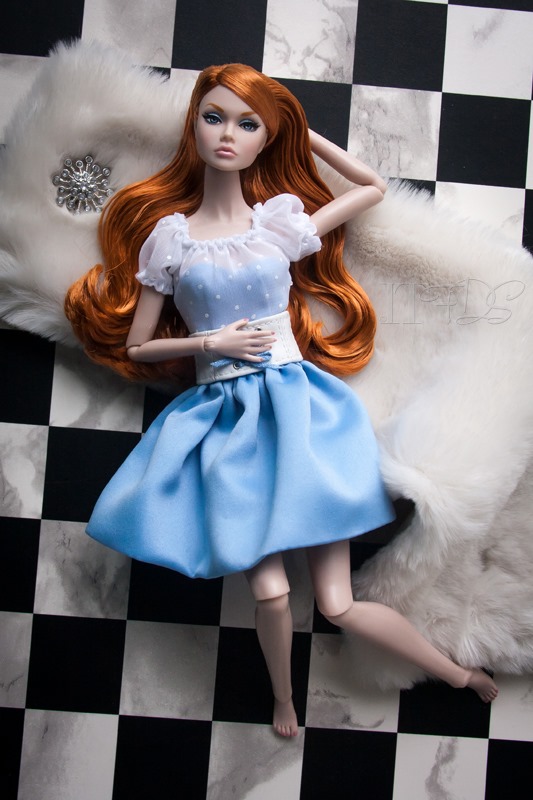 You may be noticing some different color profiles coming from me in the coming blog posts.  I have entered the sticky wicket world of Photoshop filters…and it’s a bit like Alice going down the rabbit hole.  Who knows where I will end up LOL!

“It would be so nice if something would make sense for a change.” –Alice