So what were the sneaks at convention.

In the sales room there were 2 new dolls on display. The first one is Madam La Vinia from the Harlem Theater Collection.

The doll has the new articulated Collector curvy body.

The other new doll on display in the salesroom was the new Silkstone Glam Gown.

She is the BFMC Exclusive from this year. On Instagram Designer Robert Best posted a sketch of this lady.

And the final sneak was given during the Mattel presentation. She is the new 50th Anniversary Francie.

information about this doll from TheBarbieCollection.com:

This timeless teenager first captured America’s hearts in 1966 with a youthful, kicky style that embodied the hip looks of London’s Carnaby Street and the booming mod movement in the States. “She was where pop culture was heading,” designer Bill Greening says, “as reflected in the teenage fashion trends of the mid to late ’60s.”

Fifty years later, Francie® doll continues to delight collectors and win new fans because, as Greening explains, “She has a personality all her own and a style that can be sweet and girly or mod and wild.”

To mark her golden anniversary, Greening and his team have recreated Francie Fairchild’s crowning achievement from 1967 as Miss Teenage Beauty, a look that’s highly coveted by collectors. “It’s so hard to find a vintage sample, mint and complete,” Greening says. “The fashion feels very celebratory and appropriate to commemorate Francie’s 50th.”

Francie® doll is poised to take the pageant prize in her pink ruffled A-line skirt paired with a sleeveless lace top adorned with floral appliqués. She earns extra applause for her marvey accessories, including elbow-length gloves, pale-blue pumps, red beauty sash, and loving cup. Plus, she tops off her winning look with a tiara and signature flip hairdo — the perfect complement to the sweet expression on her face.

Please to be part of this anniversary tribute, Greening points out other distinctive features of the faithful reproduction. “This is the first time we’ve reproduced what collectors call the ‘straight leg’ Francie doll, which debuted in 1966 along with the bendable leg version. She looks really cute both in the box or removed, and her doll stand even has the vintage Francie logo.”

Great for play or display, 50th Anniversary Francie® Doll is a neato way to honor this treasured teen’s lasting appeal, and you’ll dig adding her to your collection — with just a click at our online shop beginning Wednesday, 8/3/16 at 9am PT!

Enjoy a blast from the past and watch these two vintage Francie commercials from our archives! 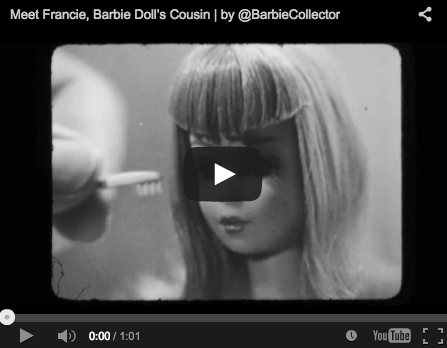 During the presentation there was a ooak color variation of this doll. 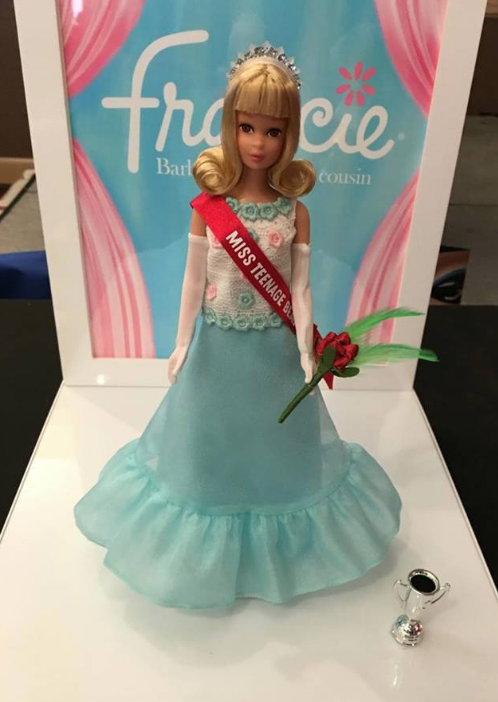 She was raffled under the conventioneers that attended the presentation. So one lucky collector went home with this beauty.

This entry was posted on July 31, 2016 by raberry65. It was filed under Uncategorized and was tagged with Barbie, BFMC, Francie, national barbie doll collectors convention 2016, Ooak, Silkstone.