Yesterday I explained why things have been a little crazy at Inside The Fashion Doll Studio.  I have been working well over a month and a half ( since Fashion Royalty convention really) to get our house ready for a charity holiday tour that included the doll room.  The same weekend the tour happened, I was also contracted to photograph my daughter’s dance schools dress rehearsal of The Nutcracker.  We also needed to  attend her performances.  I also hosted a ladies holiday tea for about 50 ladies and to top it off…it was my birthday in there somewhere.  There was LOTS going on the weekend of December 6 – 8th.

I left off in part one of this post explaining my anxiety at opening up the doll room to the public for this holiday walk.   I was anxious to see what people would think.  I was fully prepared to answer a few questions and field comments like “Are you crazy?’.  What I was not prepared for was to be fully occupied the three hours Deanna, Hilda and I proctored the doll room area with comments, questions and exclamations of joy and wonder.  I called the evening “better living through Barbie”.  I think the thing I heard the most as people came up the stairs to the doll room area was their surprised gasps of “ OH MY GOD!!” upon seeing some of the collection for the first time.  It was an exclamation of an unexpected positive experience. 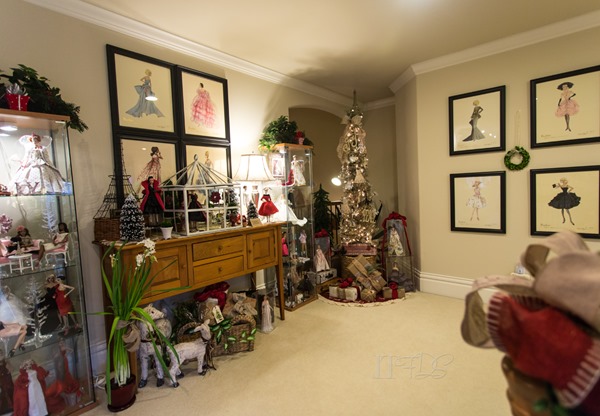 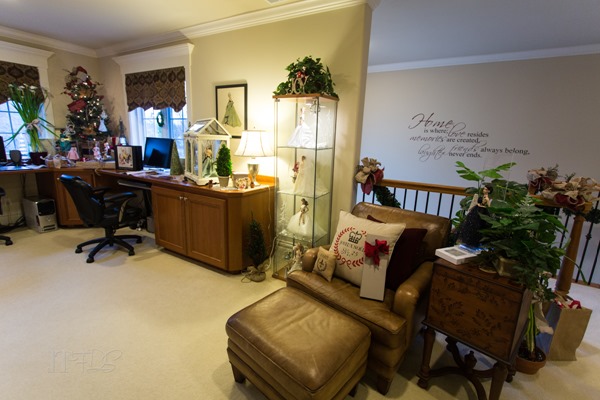 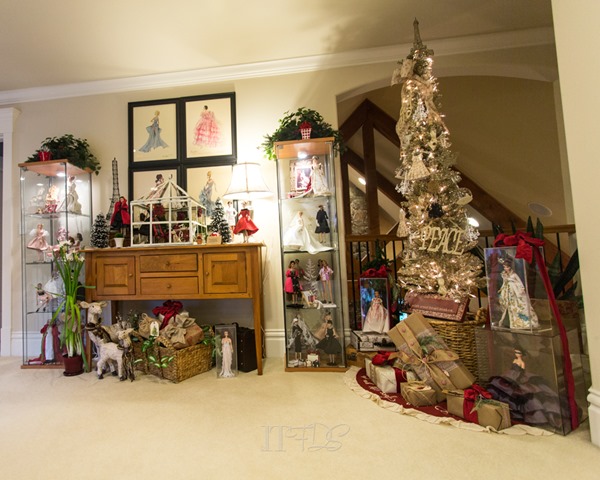 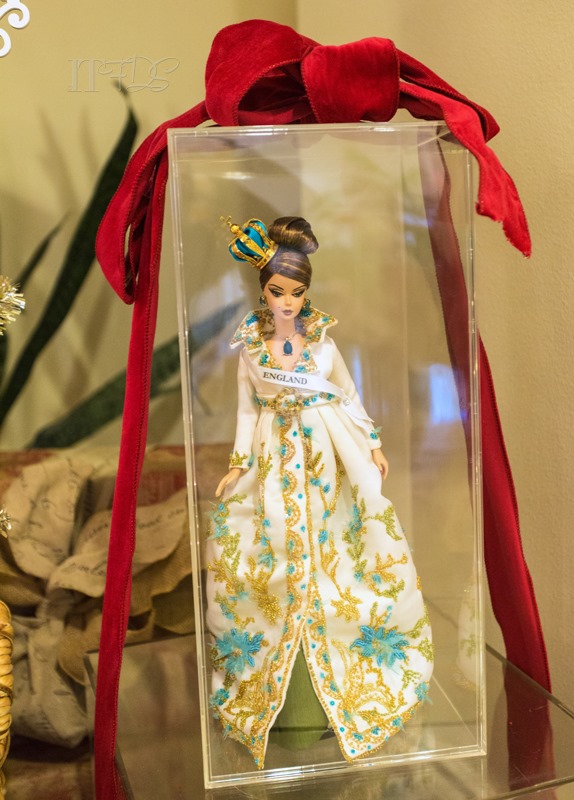 The collection was not what people were expecting and the look of amazement when they looked around warmed my heart.  When I questioned people “ Not what you were expecting was it? You were expecting the Barbies you see at Target right?”  They would reply every single time “ Yes!” with a wide-eyed expression.  I received thank you upon thank you for sharing the collection.  There were lines to get up to the doll room area.  At some points during the day, there were lines just to get into the house let alone the doll area.  The Assistance League of the Eastside had told people that there would be some Barbie experts on hand from the hours of 4-7pm to answer questions.  People came back!  They came back and brought their mothers, their daughters, their sisters and some even brought back their husbands.  I think that was the biggest surprise of the evening for me.  These husbands not only came into the doll area but they spent time looking AND ASKED QUESTIONS!   I was completely amazed and overwhelmed at the outpouring of interest.  I enjoyed hearing the rich tapestry of stories and Barbie memories that unfolded throughout the evening.  Sisters recounted playtime memories with each other, Grandmothers and mothers remembered sewing or crocheting for Barbie and the granddaughters and daughters remembered learning how to sew through Barbie.  Many remembered the first experiences of self expression through cutting their Barbie’s hair. 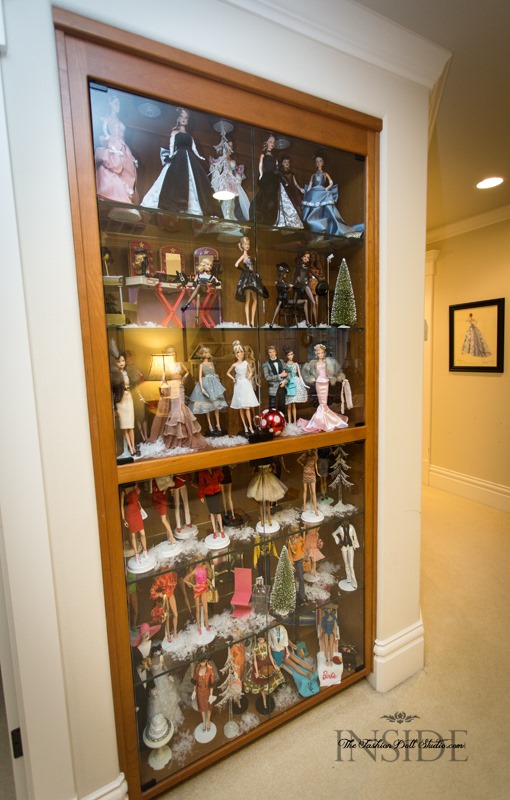 The fashion was another big topic of discussion.  There were many conversations about particular designer influences and most everyone enjoyed the 1/6 scale purse tree in the actual doll room itself.  I had a buyer for Federated Department Stores come up to me and say how much she loved how everything was displayed. 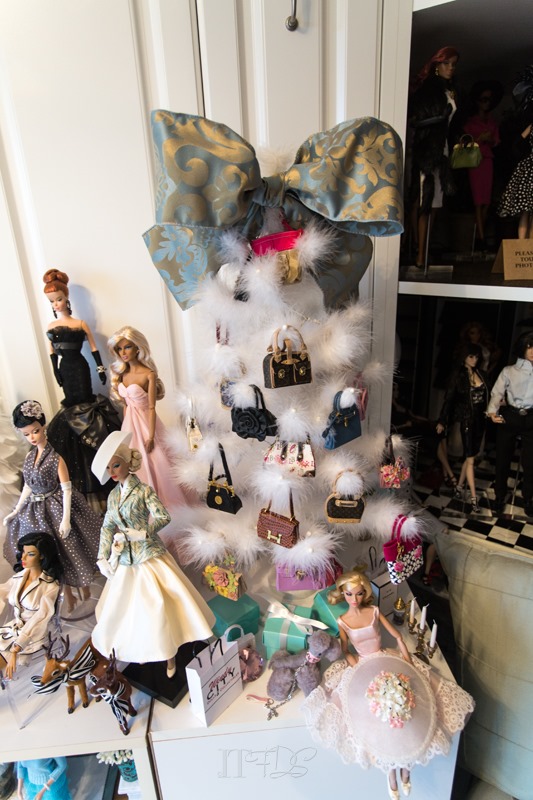 The most common questions of the evening were:

1.  How long have you been collecting?  Since my daughter was 3 so a little over 10 years.

2.  Why did you start collecting?  My daughter received a collector Barbie when she was 3 and my first thought was “ Great!  who gives a 3 yr old a collector Barbie?  She is going to trash it!”  But she didn’t so I thought maybe collector Barbies would be something we could do together…you know…something for Christmas and birthdays.  I started to do some research on collector Barbies and started looking at Barbiecollector.com and was blown away by the collector doll offerings.  I essentially went down the rabbit hole at that point….and have not come out yet.

3.  How many dolls do you have?  I currently have around 600 and that is most likely as big as it will get.  I am maximized right now which means…if something comes in…something has to go out.

4.  What is the most expensive doll?  I never really answered that question…instead I would point to some of the rarer items that are in the collection.  I have a BFMC display case that is a treasure in my collection and I managed to procure a City Smart Silkstone Barbie through a great doll friend a couple years ago.  I also have a set of 1/6 Bespaq bedroom furniture that is very rare and I treasure that as well. 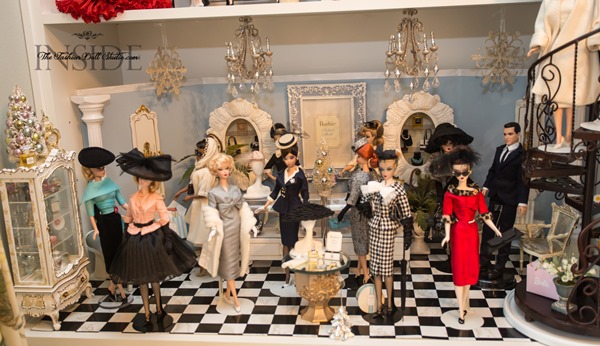 Some of the new displays for this year are as follows: 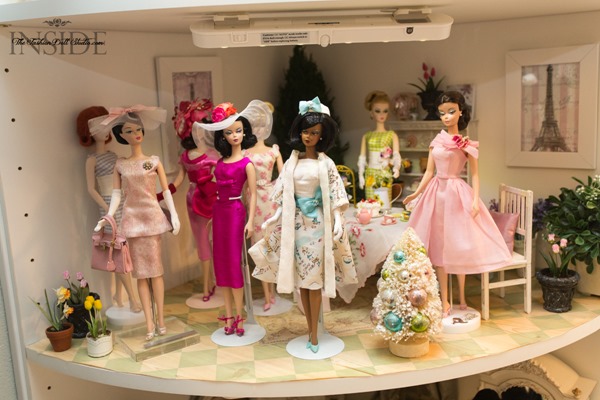 I also picked up some amazing 1/6 scale furniture pieces in Paris this past year. 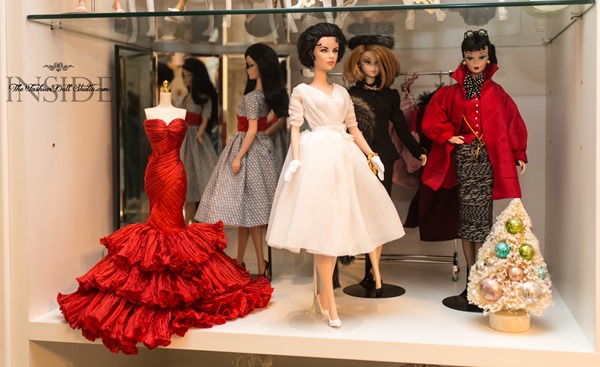 and the nightclub scene

And a new treasure added for the walk.  A stunning pink silk and French lace gown by Hilda of Bellissima Couture.  She made me this for my birthday…and I just about cried when I saw it.  Stunningly beautiful beyond words!!  Love ya Hilda…Mwah! 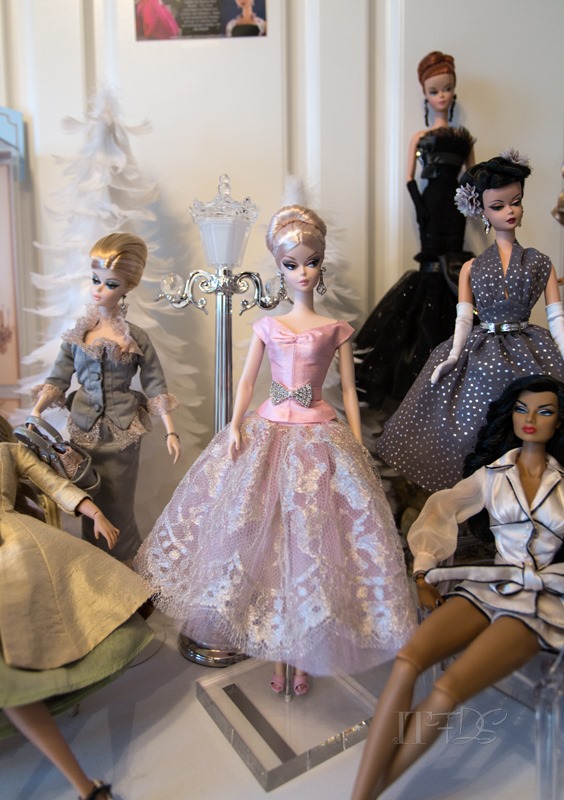 The entire day of participating in this home tour and showing this collection was a completely amazing experience and the fact that it helped raise money to support local and very necessary programs made it that much more meaningful.  In this season of giving, I am so very grateful to all the people who opened their hearts, minds and pocketbooks to support the Assistance League of the Eastside.  I also want to thank those who came up to me and personally commented on the collection.  As an avid collector, It was a complete joy to see the love of this doll expressed and for some rekindled.