I think Steven Frasier is amazing.  I believe I have almost every couture outfit Dressmaker Details has ever produced.  I love his aesthetic and the fact that he fits his clothing to fit both the more voluptuous Fashion Royalty and the slimmer Barbie Silkstone form.   I also appreciate the details he puts into his product.  If you are buying a couture outfit, you will  get the jewelry, purse,gloves, nylons and shoes to go with it.  He typically designs a special couture outfit for the National Barbie Doll Collectors Convention each year.  It is something I look forward to every convention.  This year, his design was called “Summer Magic” and indeed it is.  I absolutely adore this creation…so frothy and feminine.  It also fits in with my collection perfectly.  It was very hard to find a model to wear this lovely creation.  There were simply too many choices.  I wanted a model who would showcase the femininity of this gown and really enhance the beautiful soft blue of it’s fabric.  I finally settled on High Tea and Savories because I just love the haughty high fashion look of this lady.  Her soft makeup palette makes her a favorite of mine when I have an uber feminine gown.  I also felt the beautiful blue of her eyes would be complimented by the gorgeous color of this gown.

The details of this gown are worth the purchase alone.  The dress has little sequins and beads sewn into the soft tulle.  The bracelet is phenomenal.  I had trouble closing it around my models wrist so I added a small round silver link and it works perfectly now.   If you don’t already use these, a pair of bullnose curved pliers are a must when it comes to putting jewelry on these diminutive divas. 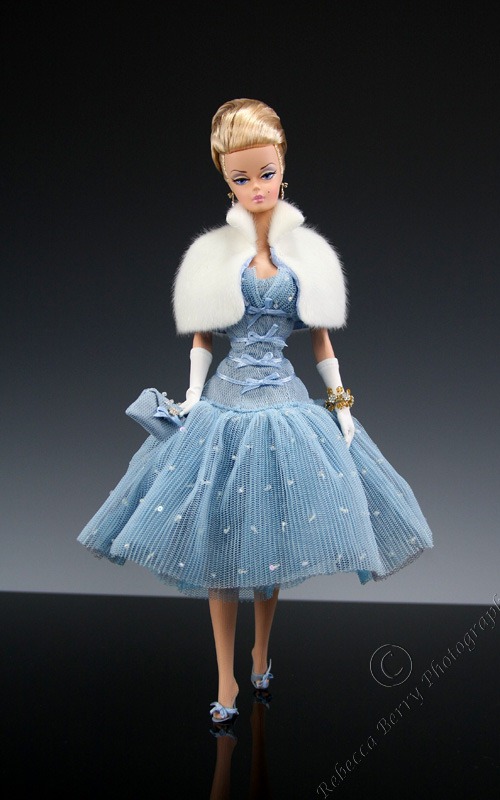 Typically, the last evening of convention there is a final dinner and you receive the official convention doll.  At this years convention, as it was Ken’s 50th anniversary, we received a doll set.  A beautifully designed and crafted Barbie and Ken set designed by the very talented Matt Sutton and Matt Trujillo.  I just can’t say enough about this pair of gentleman….LOVE YOU GUYS!

Here is a quote from Matt Sutton about the inspiration and ideas behind the dolls….

“They weren’t designed as “formal”– the thought expressed to us was that they were a young couple in 1961 in Ft Lauderdale, went to a lovely dinner, and found themselves taking a long romantic walk on the beach at night. It’s dinner jacket and party dress, not tux and ballgown. Matching ties and/or a cummerbund seemed too “formal” and “prom”, which wasn’t the esthetic we were going for. Plus we loved the idea that she was dressing in “his” color (the aqua) as a tribute to him, vs the matchy matchy…

We actually did a TON of research for the era, and made sure things were as accurate as possible, and still within our design sense.   Ken’s jacket– did you notice his little gold cufflinks? (another subtle homage to the 50th) Her dress is very much of the era, and the sash is sort of a signature of mine– again, the aqua is Barbie paying tribute to her main squeeze. ^_^” 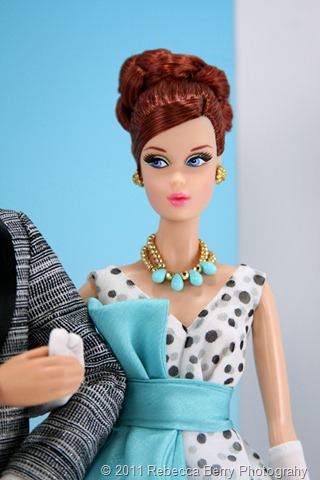 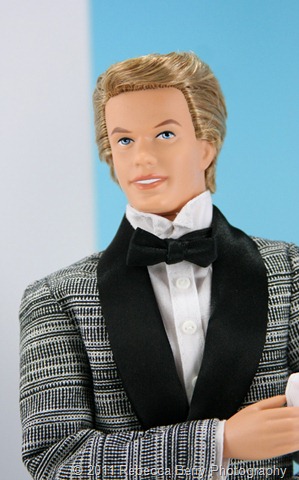 Steven Frasier will introduce an exclusive NBDCC outfit this year and it’s a beauty!!  A teaser photo was released a couple of weeks ago and today he released the full photo.  Oh my word!!!  I just love this powder blue little beauty.  I will be looking for his room as soon as he is open for business on Monday for room sales.  Sooooo excited about this one.

“Summer Magic is a limited edition of 300 pieces.  The boxed fashion features a strapless party dress of pleated tulle with beading and ribbon details.  Also included are matching shoes and purse, golden floral jewelry and a faux fur capelet for chilly summer nights.  Its the perfect outfit to wear to Ken doll’s 50th birthday party.”