But she won’t be shipping until March 1st folks.  If you want her sooner, look to the dealers, they appear to be getting them first.  I like this idea of giving the dealers first dibs on shipment.  It makes sense to me and it helps support those dealers that have been loyally selling Mattel’s collector products for all these years.  I called my trusty dealer Barb of Windy City Dolls the moment I saw these ladies showing up on Ebay ( not happy that this is where the first ones showed up but not surprised either).  She sent one over as soon as they arrived at her shop. 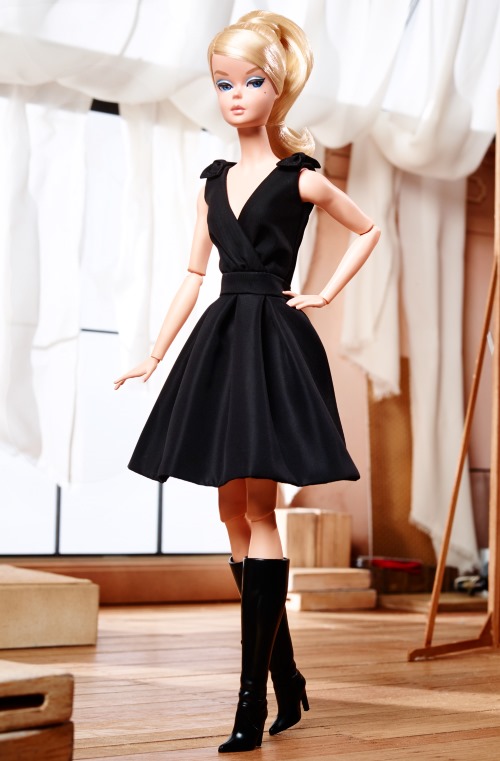 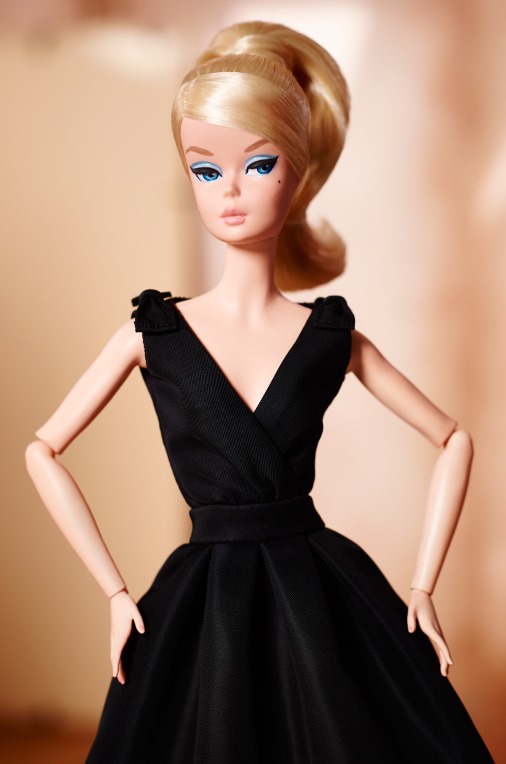 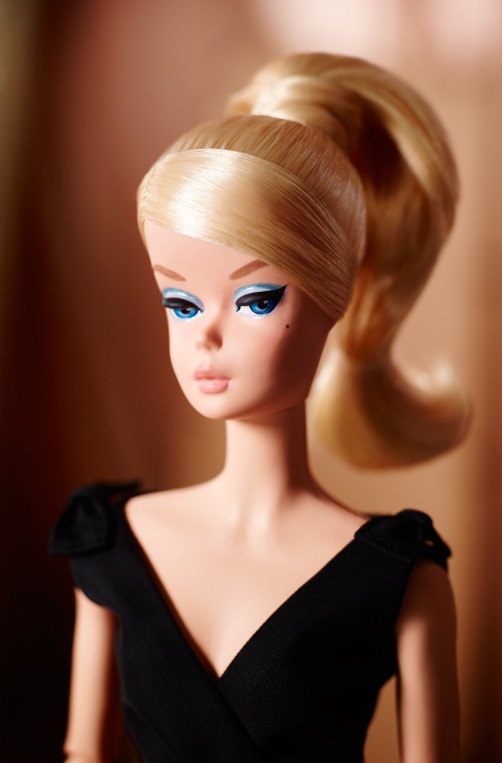 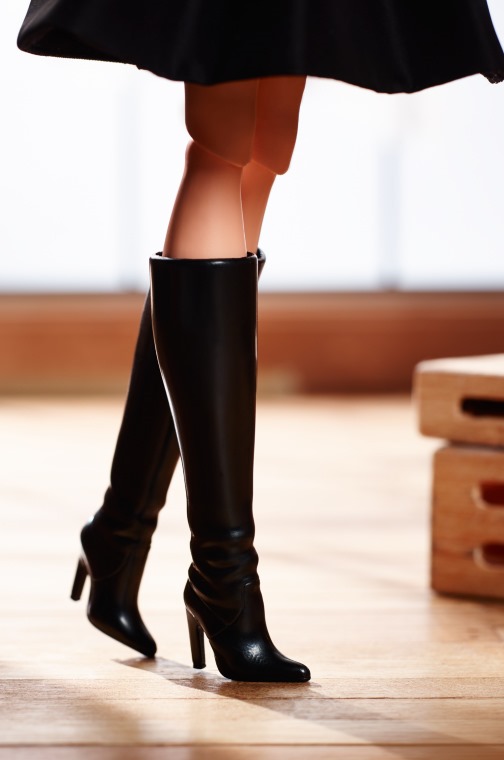 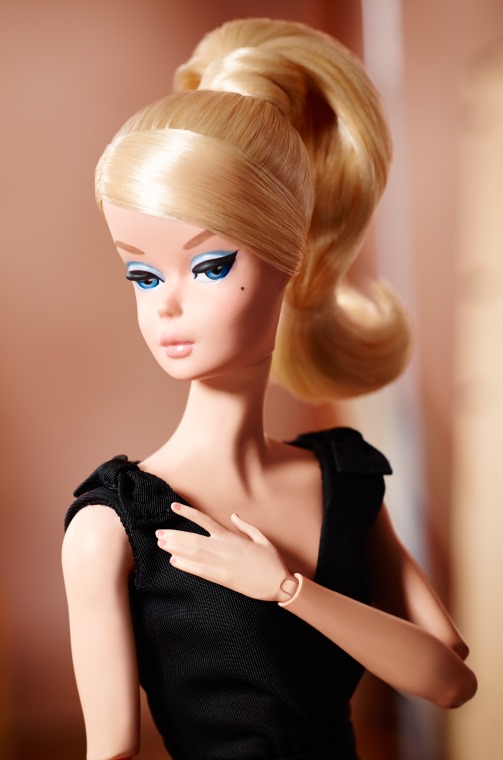 So…what do I think?  I think the face on this first Silkstone of 2016 is a winner.  It is one of the best facial screenings I have seen in a while from the BFMC.  Very soft, and pretty.  The black dress is basic.  The material is nice and of a good weight…but basic.  The boots are…basic.  They are plastic people and almost impossible to get off unless you use the hot water trick **see below.   No jewelry, purse with this one nor undergarments..yep that’s right…Barbie is going full commando.

The bigger question I think is what do I think of the body of this doll.  First and foremost, the dimensions are NOT the same as previous BFMC Silkstone bodies.  The bust is most definitely smaller.  Clothing does not fit exactly the same which surprises me as I believe Mr. Best said that the body was going to be the same proportions in the video announcing the articulated bodies.   I am not saying the body is bad…just different dimensions and for us redressers, that will be an issue.  The material feels weighty and solid which is nice and the joints appear to be solid and stay where you position them.  It is basically ok…but not great.  Here is why:  1) The articulation on the joints is minimal except for the legs.  This girl can do the splits if she wants but she cant rotate her hand enough to fully bend it one way or the other…it only goes a little bit one way or the other.  She can just barely put her hands on her hips.  Compare the functionality with Integrity Toys dolls and you will find that IT bodies are loads ahead as far as flexibility.  The new Silkstone body can however, do the splits whereas IT dolls cannot.  Not sure how that is something I will utilize unless I get the letch to do Gymnast Barbie, or Pole Dancing Barbie or perhaps contortionist Barbie.  You never know…it could happen.  I am hopeful that the next iterations of this body will beef up the bust size and include some additional rotation in the joints.  My other big concern with these new bodies are the rough edges and seams that show.  The knee joint on the one I received had a big ugly rough edge at the seam right above the knew joint.  Some may argue that you will hardly ever see that…maybe but in the dress she came in, it was VERY evident.  It’s not worthy of sending back, it’s just sloppy work on the part of the factory.  Am I expected now to file down the seams of Silkstone dolls that I receive?

On the very positive side however, the doll is only $40.  That is an extremely low price point for a Silkstone Barbie doll.  So…messy seams and all, this doll photographs beautifully.  I admit, I had to pin the gown on her so it fit more securing up top.  It was made to be worn by the older body.  She does look good though and I guess each collector will have to decide for themselves if she is a good fit for their collection.  I am keeping mine for the present and still hopeful for the year ahead for the BFMC.  I think it will be a very much paired down year but time will just have to tell on that one. 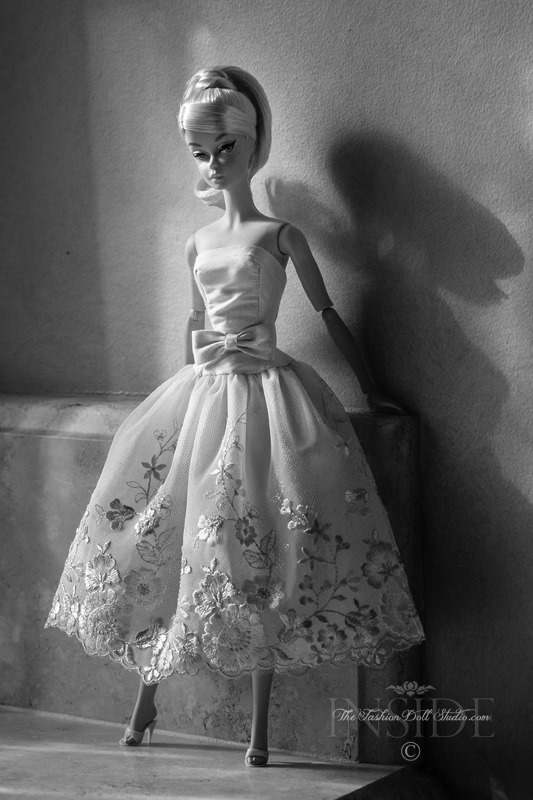 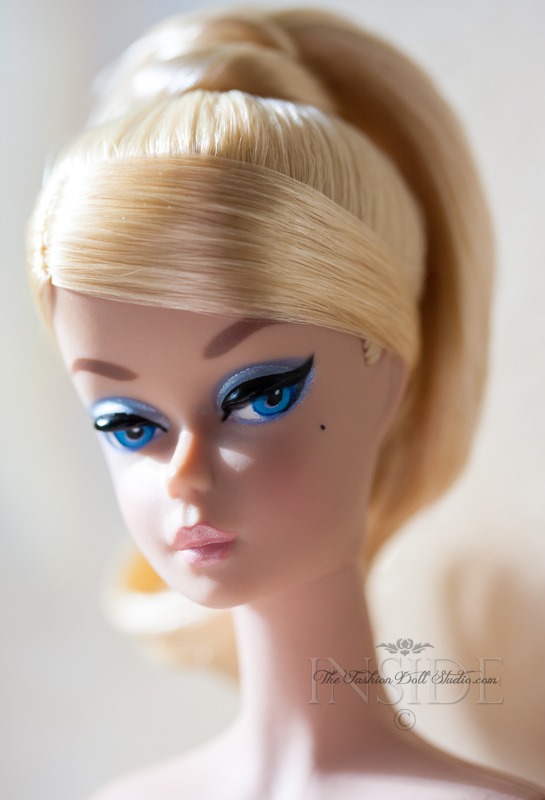 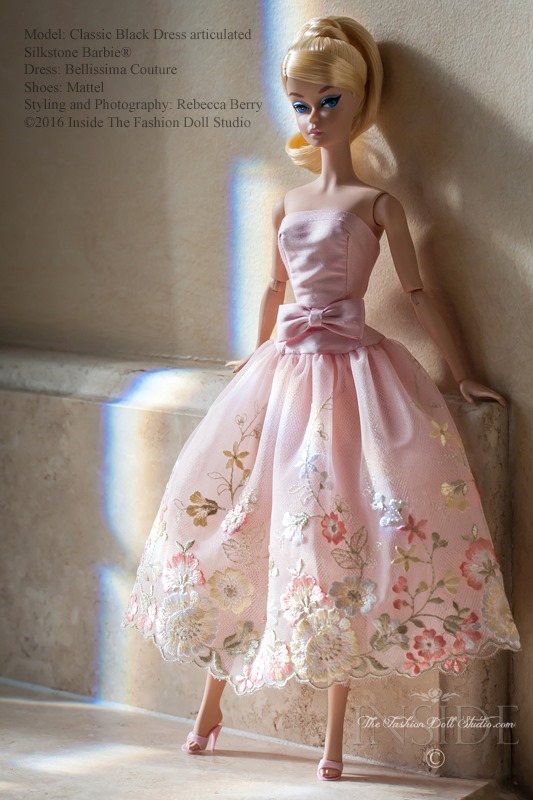 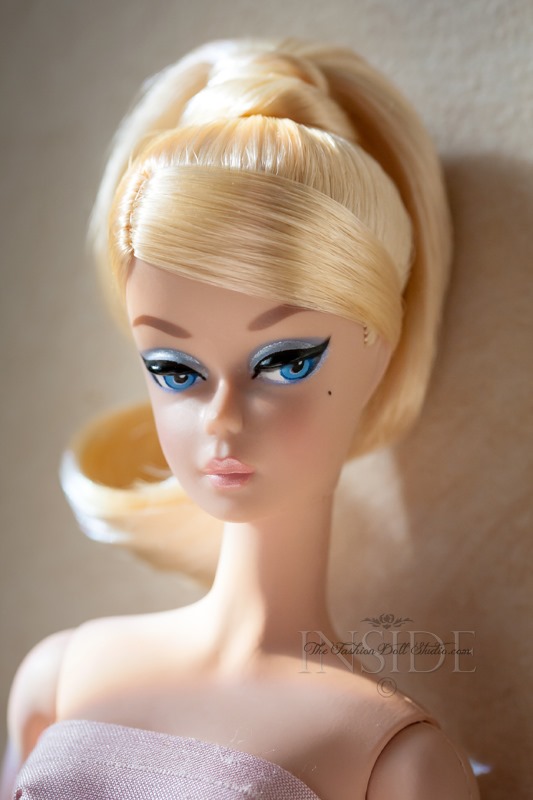 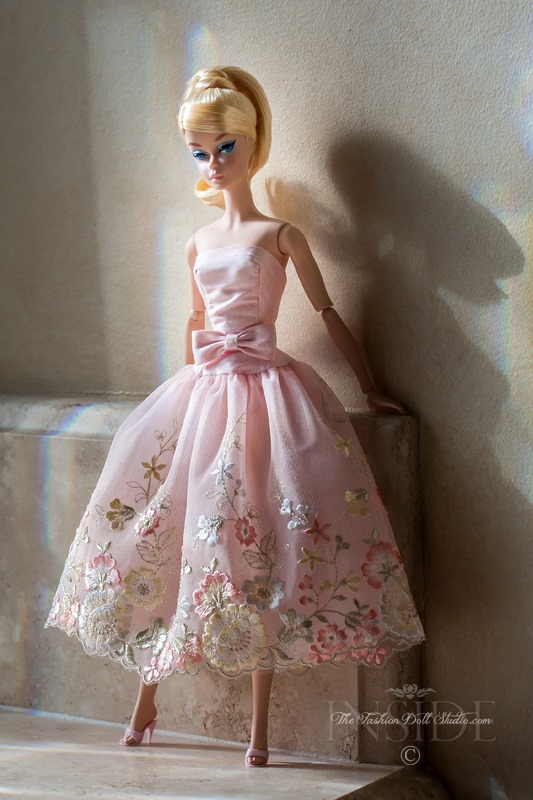 Beatuiful dress was made by Hilda of Bellissima Couture.

Oh..and as an added not to my loyal readers…After filing multiple DCMA claims with various accounts on Pinterest and Instagram all of which were cutting the watermark off my photos and passing them off as their own, I will have to start putting even larger and more intrusive watermarks on my photos.  Not my choice people but there you have it.  Sometimes…I just don’t understand some people.

**Hot Water Boot Trick**  To help get those pesky black boots off, I heated up a cup of water to almost boiling then stuck the legs and boots in for about 30-35 seconds.  Using a towel because they will be hot, boots should slid right off.  If not, put the legs with boots back in the water for a bit more.